The Little Dove's Message Of Hope And Strength 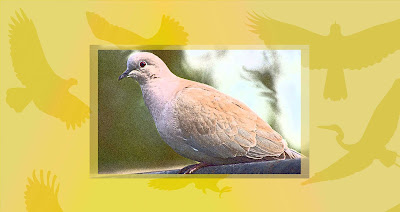 We were lucky to have escaped  the worst of the real life storm named Ophelia where I live in the UK yesterday.  The winds were very strong, but nothing like the force that swept through Ireland and the rest of Britain.  However, as I looked out of the window last night I spied a tiny collard dove huddled against the edge of the path and as it was getting dark I decided to go out and see if he was ok.  His eyes were closed, his head was down, but he was breathing.  I picked him up, he didn't even struggle, his soft velvety feathers covered his tiny frame and I guessed he was one of this year's youngsters. I took him indoors and placed him in a spare bird cage that I had, he sat on the bottom of the cage his eyes still shut and he looked totally exhausted. I imagine that a gust of wind from the storm may have knocked him into the side of the house and things didn't look too good for him.  I tried to give him a few drops of water and some food, but to no avail, he wasn't responding to any of it. He was warm and cosy now though, so I decided to just let him sleep and if he was still alive in the morning I would take him along to the vets if he still refused to take any food.   I got up early to see if he was ok and he looked a little bit brighter, but he still wasn't eating. The vets didn't open until 8.30am so I had a couple of hours to wait, it was a nice day, the storm having passed, it was warm and sunny outside.

As I watched the tiny dove he suddenly lifted his head, his eyes now open and he started to preen his feathers. He began to recover very quickly, he wasn't huddled on the bottom of the cage anymore, he was up walking about, trying to find a way out of the cage.  I watched him carefully, would I take the risk of letting him go only to find that he couldn't fly properly and I'd have a job catching him again? I decided to give it a chance, it was ideal conditions as the day was calm and bright and he looked strong enough.

Taking the cage into the garden, I placed it on the lawn.  I opened the cage door and he just sat there on the little water dish. Putting my hand into the cage I lifted the water dish with him on it and placed him outside of the cage onto the grass.  He blinked in the sunlight and suddenly he spread his wings and soared up into the sky with so much energy that I was stunned.  He circled over the house getting his bearings and then he zoomed off into the distance happy and free.

I was delighted, the little sweetheart had survived his traumatic experience and he was strong and well again as he went off to join his friends.

It's sort of significant of the times we are living in, we are being battered by everything that life is throwing at us at the moment, through design or by accident, but we are survivors, we have an inner strength to keep us going and to help one another.  My little collared dove cheered me up enormously, I gave him shelter and he gave me joy!