How Are Your SL Friends? 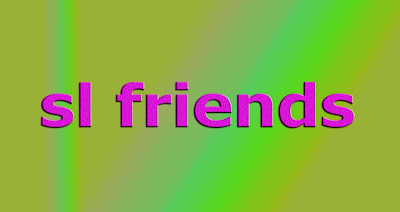 "Yes, I get by with a little help from my friends", as the Beatle's song goes! This is just a little thought for tonight.  Second Life is a great place for making friends and not such a good place for friends hurting each other.  The other day I was asking about someone who hasn't been in SL for a few months as I wondered if he was ok.  I was told that he may not come back to SL and some people had 'unfriended' him on FaceBook because of his posts on life and politics. How sad is that!  I don't do FaceBook, but I did have a look at his domain and his site states it has no friends listed.  I guess he has hurt feelings and decided to delete whoever was left on his list.

We are told to be tolerant, yet those telling us we should accept this chaotic life and suffer in silence are the least tolerant people on the planet as they condemn anyone who seeks the truth; Why? because they don't want the truth out there if it doesn't suit their agenda. So they encourage the isolation of people who want to find out what life really is all about by turning friends against friends; And we let it happen because we are so afraid of the unusual, the fear of the unknown, anything that is outside of the tiny box we call 'normal'.  The incredulous thing is that people appear to have a 'turn off' switch and they refuse to talk about or debate topics that cause them personal concern because they feel threatened by new information that goes against what they have been taught. Well, sometimes new information is good, new information can transform the chaos into the harmony we so need, we have to give everything and everyone a chance. To stay blinkered, to accept the chaos, to be told we can't ask questions is to carry on down this road of destruction that we find ourselves on at the moment.

Don't turn against your friends, listen to what they have got to say, tell them your side of the story, share information, argue your point, but without  hostility and listen to theirs without shouting them down or dismissing what they have found out because it seems alien to everything you believe in. None of us are perfect and none of us are right about everything all of the time. You can be blamed, however for having a closed mind that refuses to face up to the fact that things are not right; Putting your fingers in your ears and humming loudly won't stop bad things happening.  What will stop the bad stuff? Loving your friends and family no matter what their opinions are, looking after each other and accepting that life IS full of mystery and we are all learning each and every day..........

I'm just a little fed up with man's inhumanity to man tonight and I hope our friend on Facebook is ok. It wouldn't harm his SL 'friends' to tell him that he's a valuable and well loved person and that they miss him.