Lots of Fun At The Nightmare Event 2016 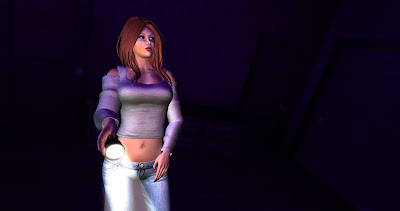 It's getting pretty spooky in Second Life as Halloween approaches.  I thought I'd look around some of the sims to see how scary it is out there!  One sim in particular was very crowded when it first opened and I had a job teleporting over there, so I left it a couple of days and tried again.  It's called The Nightmare Event and its a hunt with some great prizes if you win.

I put on The Nightmare Event hud, accepted the torch and off I went into the labyrinth that awaited me below the surface of the welcome area.  I was instructed that I had to find 'teeth' along the way, plus there were some keys to pick up that opened certain doors. There were 25 teeth to find and you have to get all 25 before you can claim the prizes at the end.

I'm certainly glad I took the torch, some of the passages and rooms were eerily dark and there are some surprises along the way with ghosts and things that made me jump. The sim owners had done a great job, it was very clever as one area took you to another, you never knew what to expect next.

Being usually pretty useless at SL hunts, I have to admit that I didn't get all the teeth the first time and had to go back, but I didn't mind it was a lot of fun.  The 25 teeth give you the ability to accept gifts from the market stalls and there are some nice Halloween prizes to be had.  So go over and enjoy yourself at The Nightmare Event 2016.