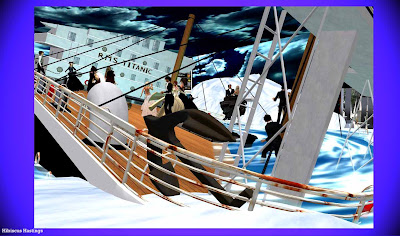 What an exciting invitation! To dance on the deck of one of the largest, most luxurious and most storied ships to ever sail, the RMS Titanic. Who could turn that down? So on Saturday, April 9, this beautiful ship made a brief and ghostly reappearance allowing a select few to once again enjoy her splendours.
The RMS (Royal Mail Service) Titanic set sail on April 10, 1912 from Southampton, England bound for New York City. In all there were 1316 passengers and 885 crew. At 11:40 P.M. on April 14 the Titanic struck an iceberg and sank 2 hours and 40 minutes later, at 2:20 A.M. on April 15 453 miles southeast of Newfoundland.
Once aboard the NWEC Titanic guests were welcomed by host cutewillow Carlberg, resplendent in a lovely pink silk gown. DJ Janis Short was on the bridge playing romantic music to set the mood. Couples dotted the deck and danced to such songs as “Marry Me” by Train (a special request), Kirsty MacColl’s “Titanic Days” and Cyndi Lauper’s “Time after Time”. Half way through the evening Janis played “My Heart Will Go On”, made famous in the “Titanic” film and sung by Céline Dion.
Everyone was dressed to the nines. Some of the ladies accessorized with the beautiful “Heart of the Ocean” necklace. Designer extraordinaire nils Tomorrow went a different route, deciding instead to come to the event with her rubber ducky, no doubt taking into consideration the fate of the original Titanic. And perhaps nils was psychic, because towards the end of the evening the deck began to slant ominously. Avatars continued to dance, nonetheless, but this became increasingly difficult as the freezing water began to cover the dance floor, which tilted alarmingly! There were touching scenes as some couples clung to each other, no doubt inspired by Jack and Rose of movie fame. Others danced on in the frigid water, some got closer to nils and her duck, and the rest tried to climb up the floor to safety. Being Second Life this was actually feasible. TP’ing out was another possibility, but I don’t think anyone did since everyone was enjoying the party too much.
It was another wonderful evening at the New West End Club, thanks to cutewillow Carlberg, Janis Short and Clive Hissop (even if he did try to dunk us in the drink).

Did anyone re-arrange the deckchairs ?