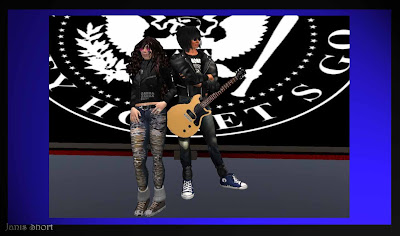 On Saturday February 12th The Ramones received a Lifetime Achievement Award from the GRAMMY’s, an organization that did not acknowledge the band at all during their recording years.
.
It’s still a wonderful thing that a band that paid for their touring by selling T-shirts is now being accepted by the masses, through their inclusion in films, commercials and now a GRAMMY!
.
The West End Club paid their own 2 hour tribute to the musical career of the Ramones when DJ Janis (that’s me) pulled out all the stops and careened through 54 songs, most of which were under 2 minutes long. These little gems, including early classics “Blitzkrieg Bop,” “Judy Is A Punk Rocker” and “Beat On The Brat’ and some club favorites such as “Rock n Roll High School” and “I Wanna Be Sedated.”
.
For me it was such a joy to run through this amazing repetoire of pop/punk tunes. I spent four years working as National Publicity Director during the first four years of the band’s recording career and traveled the USA and Britain with them. Joey Ramone was one of my most beloved friends. I don’t think we went a day without talking when I worked at the record company and when he was on the road I got some great postcards and letters. Although three of the four original members have passed on to that rock club in the sky, their music continues to be vibrant and fun to listen to. I tried to tell some little stories at the show, to bring the songs to life.
.
I had the privilege of being the first one to hear “Sheena Is A Punk Rocker” when Joey called me and played it to me over the phone on his two string guitar. “I Wanna Be Sedated” was written after Joey had a horrific run in with an exploding teapot that covered his face, neck with second and third degree burns. So bad that the day after the accident he could not even speak. His vocal chords were covered with blisters. When he could talk he called me at work again and said ‘write this down’, the little couplet he gave me was “I wanna be sedated…Matt tried to have me cremated.” Matt was one of the bands Roadies and he had not secured the top of the t-pot correctly before Joey tried to breathe steam before a show. Joey in a feat of amazing courage, went on that night and performed an amazing set. He had been to the doctor who had put salve on his face, and the salve melted into the burns giving him a ghostly glow. He had not idea how badly injured he was til the next morning when he was rushed off to the burn unit at New York Hospital for two weeks.
.
Back at the West End, I did my darndest to turn into lead singer Joey…and do my best imitation of his very Queens, NY accent. I was actually able to play a commercial with his voice in it which made me smile, and reminded me of a little commercial I wrote which he and I recorded in the loft across the street from the legendary CBGB’s so very long ago. If you want to be a punk in second life there are plenty of clothes to be found. One of the very first garments I ever got was a freebie Ramones shirt, which Morrissey and I were both wearing when I met him back in 2007.
.
The crowd at The West End seemed to have some stalwart Ramones fans present. Seany Blinker was there in a great punk outfit. Simon Seurat dressed up like Johnny Ramone (but looked more like bass player DeeDee) and Clive made the most amazing “Gabba Gabba Hey Sign” which we all waved about with reckless abandon during “Pin Head”. What a sight!
.
I know we all had a great time at the show (especially me). Thank you to the members of The West End Club for making this event so amazing! 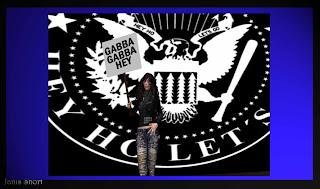 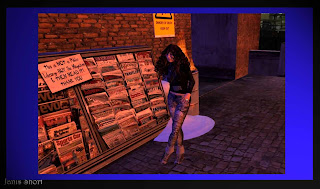 I loved the Ramones and saw them half a dozen times or so when they were in Britain, including the Clouds Edinburgh gig in December 1978 where they were supported by The Rezillos (another Sire band).

After eating that chicken vindaloo, now I wanna be well...

Aw i wish id been able to make it, RL get in the way these days! You guys look fab,glad you had a wonderful time! well done janis xx
ps hellooo drumbo xx

Hi Drumbo , haven't seen you in a long time , remember the days when we used to follow Deatoris around going to all her DJ sets lol

Janis's Ramones set was amazing , one of the best DJ sets I have been to in SL ever I think ! Janis really is a legend and we are so lucky to have her DJing for us.

I just hope I don't get known as the ' fat Johnny Ramone ' now though :)

thanks for the kind words. Funny you mentioned the Rezillos. I was up in Edinburgh visiting a journalist named Ian Cranna (from the NME) and he insisted I go see the Rezillos...I took the 45 back to Seymour Stein and he signed them. Those were the days!

Janis!! you have such a wealth of interesting stories, thanks for sharing them with us, I'm hoping for more!! (large hint!)

Hello Simon! I stopped going to SL when Dea sort of packed it in after her hip operation. I 'speak' to her on Facebook these days. I logged in a few weeks back but none of the people on my friends list were on line so I went away again

Is it true that The Rezillos were shunted down the bill for the NYE gig at the Rainbow because they had been too popular as the support band in the earlier gigs?

It amazes me to see so many kids wandering around these days wearing Ramones t-shirts when they weren't even born when the band was active.

where was this Rezillos show supposed to be...The only time they played in NYC was at CBGB's...and they never really toured the U.S. The album was released...and we did an amazing photo shoot with them...but sadly the music never took off here.

The 1977 New Years Eve on in London that featured on one of the live albums. The story I heard was that the Rezillos were supposed to be the main support band but were too popular so were first on the bill. One of my friends turned up relatively late expecting to see them but they jhad been on already.

Maybe it's a urban myth!