The Tranquillity of the Radio Theatre 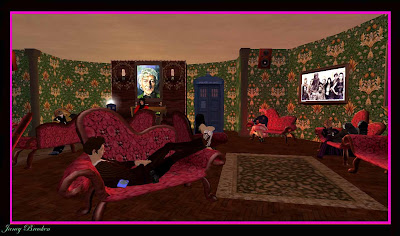 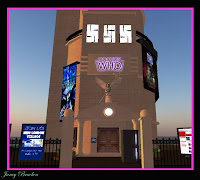 atre had a show on. I tried to sneak in so as not to disturb everyone, but without success. I had friendly greetings from people already listening to the program. Hoipoloi Gurbux, the WZ Theatre Manager, and Ebak Naglo, the WZ Radio Broadcaster were sitting just inside the door and said "Hi" too. People looked really relaxed on the comfy pink sofas and I also sat down to listen. It was an episode from Dr Who and it was nice just to sit and let the rest of the world go by as the program played! The Radio Theatre has a lovely atmosphere and I would recommend it to anyone who wants to enjoy a quiet hour listening to their favourite Sci Fi programs. We were joined by Teddy Darbyshire as well. Teddy has released a new edition of his Pictorial Post and you can pick it up from his stall in New London. It's a great read so don't forget to get your in-world copy! 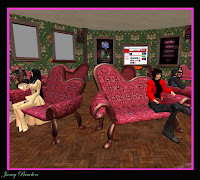 Email ThisBlogThis!Share to TwitterShare to FacebookShare to Pinterest
Labels: Dr Who, The Radio Theatre New London