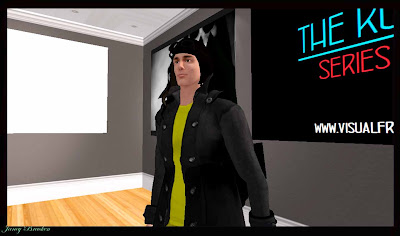 It’s not every day that I bump into a superhero and one who has started to achieve the status of having a cult following. He goes by the name of ‘The Rocket’ and he is a man of mystery who takes on fiendish foes such as Doc Terror! So I was very lucky to spot the elusive Rocket as he set up shop in Kensington, Virtual London.
,
The Rocket is actually the creation of filmmaker and actor Joshua S Joh

nson (avatar MrMudd Resident), who, along with his team, makes the sci-fi movies about the new superhero. Joshua told me “The Rocket: Series One, is a garage Superhero Web Show that is produced in the Pacific Northwest of the United States for a budget of less than 200 USD.” He continued “The Rocket profiles the life of an unlikely superhero as he battles the likes of Doc Terror, The Agency of Assassination, the Three Card Strangler, the Gunman, and Island of Zombies, and the Warewolf Adakais!”
,
Joshua told me a little about his background, he is a former Department of Defence Fire-fighter and is currently a student of Intelligence Studies. Before returning to the United States he had lived on the island of Antigua for a few years on a DofD contract. He said “While there I was able to visit Glasgow, and in 2007, because of my three trips to the UK and one to Poland, the Rocket was born.” So how did you get the idea for The Rocket? I asked, he replied “I was in the town of Paisley outside of Glasgow, visiting my girlfriend at the time. The architecture and area started giving me little scenes and sequences through daydream. Afterwards, when I had returned to the Untied States, my friend Ryan Buck who plays Doc Terror, had talked to me about making a short called 'The Rocket vs. Doc Terror'” Joshua added “Since then, five more episodes developed using the same budget ceiling, and everyone is now having a very good time with it!” Besides Joshua, the rest of the cast are Ryan Buck, Joshua Palmer, Lane Rumsey, Amy Dawn Shimanek, Ash, Stephen Bligh and Brie Morgan.
,
As Joshua’s avatar MrMudd Resident is a newbie to SL, joining in December 2010, I wanted to know what his impressions were, so far, about the virtual world. He told me he was curious about the Virtual London neighbourhood (Virtual London is owned by Debs Regent) and that he thought the Kensington area is ‘wonderful’. His shop can be found in the main thoroughfare of the extremely popular Kensington sim.
,
When I first spotte

d Joshua he had been wearing the avatar of a ‘Dalek’, one of the characters of the British television series Dr Who, which has an enormous fan base in the UK. He told me New London (another London themed sim, owned by Kat Kassner and Laredo Lowtide) was one of the first places he had come into in SL and he had been “hanging about ever since...” He explained “I'm a bit of a Whovian, and the modellers there are the best!” he said “I've become an amazing fan of Kat Kassner and Laredo Lowtide.” I agreed that Kat and Laredo work so very hard to make everything perfect in New London, and Joshua said “They really do, my digital home away from home!” Kat and Laredo have a radio theatre in the sim and Joshua was delighted, telling me “I actually heard my first Big Finish audio show today at the Radio Theatre.”
,
Joshua taught himself everything about filmmaking including the visual effects, he told me that being in SL had “made me realize I need to notch up my game a bit!” I asked him in which way, he answered “Oh, in the production aspect. Being a garage series filmed with friends, there are a lot of things which take a massive amount of effort to accomplish. It's a time consumer. Plus, after being on SL, I'm seeing that I want to create a great deal more visuals... perhaps because of the work I've seen in this digital world! New London especially.” He added “For example, since being on SL and in New London, I created an aerial sequence involving an armoured weapons platform on an airship.”
,
I was thrilled to meet Joshua (MrMudd) and I want to thank him for this interview, I think you will be hearing a lot more about The Rocket as time goes on!
'
See The Rocket at:
www.youtube.com/visualfreelancer
www.youtube.com/flightoftherocket
www.youtube.com/mrjgmudd
Janey Bracken
Posted by Janey Bracken at 00:11

Email ThisBlogThis!Share to TwitterShare to FacebookShare to Pinterest
Labels: Superheroes, The Rocket