The Moulin Rouge Was The Best Ever! 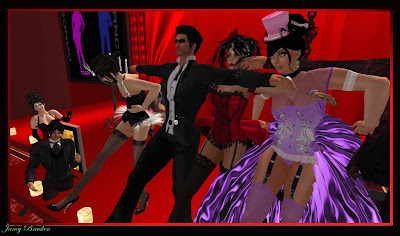 Was this the most successful ever party in SL? I’d probably put money on it that it was! The Cabaret themed event was supposed to finish at 4pm (SLT), but no 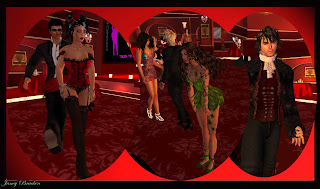 one wanted to leave! The West End Club was buzzing right from the beginning with people arriving dressed in their smart suits and showgirl outfits and I'd started to take pictures as people teleported in. The party began as the clubbers enjoyed the music supplied by wonderful dj Brie Janick who was aided and abetted by a sparkling Cutewillow Carlberg. Clive Hissop had already woven his magic by making the club into the perfect setting for the Moulin Rouge. In fact I liked the interior so much, and so did the other clubbers, that I hope they may consider making it a permanent look for this type of event; It’s romantic, cosy and full of atmosphere!
I danced as I watched the crowd get bigger and bigger and I was joined by an old friend who I hadn’t seen for some time, BillyTorri Deceit, who dropped in for a boogie, looking cute in his little cookie monster avatar. He told me he used to tour all the different London sims, but liked the West End Club the best. He couldn’t stay, but promised he would be back soon! As I continued trying to take pictures I started to feel the SL lag was against me as I sent my cam into the crowd to get 'close-ups' of the dancers and their fine costumes. Brie played a great assortment of Cabaret and Moulin Rouge music and then she sent me a message asking me, with a group of other ladies, to join her up on the stage in 15 minutes time. I decided to re-log and clear my cache to see if I could get SL a bit less laggy. I came back in time to work my way to the front of the dance floor and climbed up onto the stage with the others. With the amount of people in the club and my computer wanting to heat up, I couldn’t take any more pictures without a lot of difficulty, but I was still enjoying it all immensely. We performed ‘Lady Marmalade’ and then the can can and pretty soon the guys got in on the act too. The stage was packed and with us all being slightly out of sync at times, it made it even funnier.
Luckily there were some wonderful photographers also taking pictures, Drax Ember, Brie Janick, Simon Seurat and Hibiscus Hastings had been busily snapping away! They kindly sent me their pictures, which I will publish over the next couple of days.
Well done Clive, Cute and Brie, you did a perfect job and I want to thank you for such a brilliant evening! 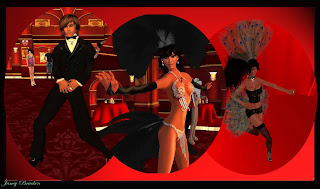 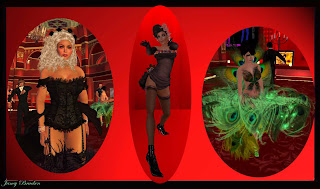 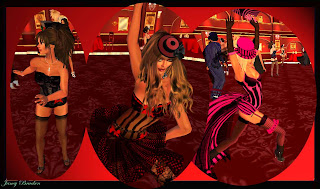 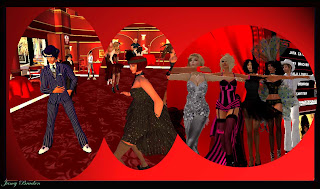 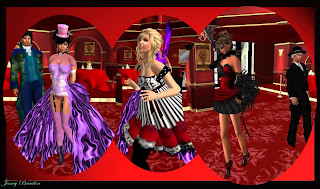 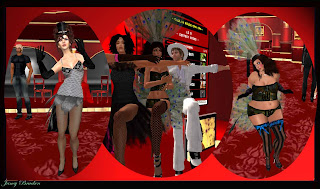 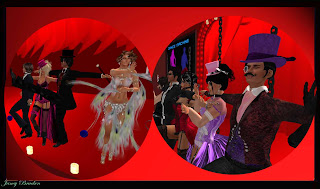 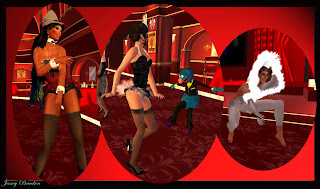 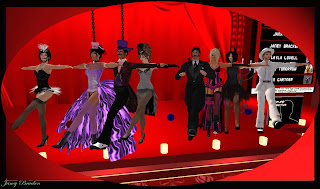 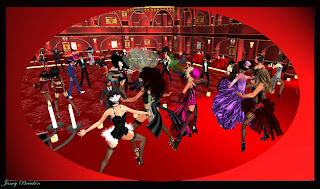 doing the hight kickwas he best
the can can sorry ed dint mean boot you in the can
giggles
they all looked so amzing clives builds are truly the best
:)