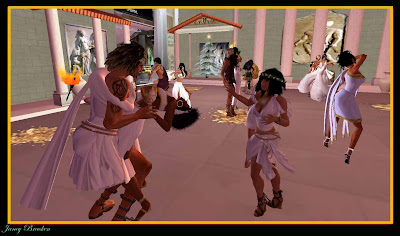 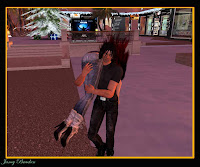 est Roman outfits. Suddenly their peace was disturbed by a tall dark haired man struggling towards the club doorway, a figure draped over his shoulder. The man carried the prone woman up the steps and into the club, sweat beading his brow at the effort it took to move. Suddenly the woman woke up and shouted “I’m a Celebrity Get Me Out of Here!” Yes it looked like Gillian McKeith had fainted again and had to be carried to safety! (only it wasn’t, it was rascal Drax Ember playing a joke and me making out I had fainted, a bit like Gillian! I have never laughed so much because Drax’s pose that he was using was so laggy and 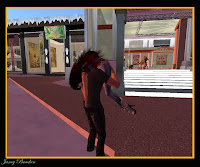 it took him about 5 minutes to walk to the club door! For those who haven’t seen the tv show here is the video of Gillian fainting http://www.youtube.com/watch?v=LlUS3XvrvGc). There was great debate in the UK as to whether she faked the fainting to get out of the trials on the show, or if she really did faint, the jury is out on this one!!
We soon changed our clothes and put on some togas. The rest of the crowd looked brilliant dancing away to dj Corolla’s music. Moviemaker extraordinaire Roberto Highfield was busy shooting a great film of the evening (minus Gillian role-play I’m pleased to say!) and you can watch it at http://www.flickr.com/photos/31969140@N06/5220447748/ 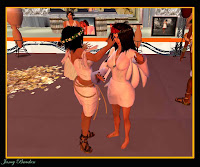 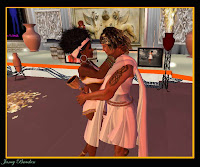 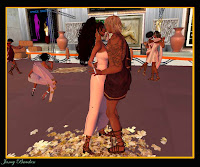 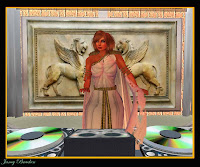 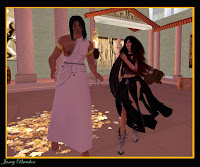 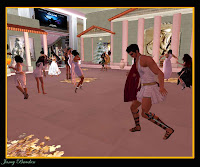 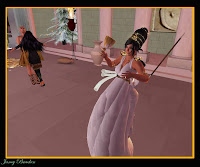 Email ThisBlogThis!Share to TwitterShare to FacebookShare to Pinterest
Labels: Gillian McKeith Fainting, I'm a Celebrity Get Me Out Of Here, toga

Looks like a fun party. Poor Drax, I hope his back is ok, though.

Hello i would just like to comment on a contest in the new west end club yesterday.
It was clear to me and others that the contest had been rigged so that someone called tasty afterthought would win .
I was then told this was a Alt of someone working there and sure enough Tasty Afterthought paid all the winnings back into the club tip jar.
I'm sorry but i find this very troubling why should people spend there time getting outfits for the contest's only to have it rigged by staff members.
It's a great shame its come to things like that in the New west end club and I'm not sure i will be back in the future.
I also can not leave my name as i fear i would be banned for leaving my concerns on here.
Contest was at 2-4pm slt 3/12/2010

Hi Anon, thank you very much for your comment. I know the club wants us to vote for the best costumes for these contests and people tend to vote for their friends on occasions, which they are asked not to do. I can’t comment on the club’s policy, but many people have won big money prizes over the time that the club has been opened, and I know for a fact that the winners have been almost certainly nothing to do with the management. At some regular events, especially on the trivia nights, the owners pay out an awful lot of money to the lucky intelligent ones (of which I never know the answers or I am too slow to type it on the rare occasion I might get it right!). Many people appreciate the generosity of the club owners and like me, try to tip the staff for a good night’s entertainment as often as possible as they work very hard. I’m sorry that you were unhappy with the contest that night, as everyone looked great and I’m sure you were one of them. I left before the voting took place so I had no idea of the outcome, but I hope this doesn’t put you off of going back to the club, as it is one of the friendliest clubs in SL and run by the nicest people who just want everyone to have a good time.