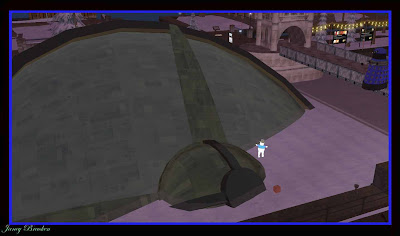 They may have thought it was the Christmas star, anyone who had seen 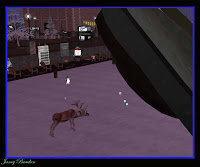 the bright light just before it had tumbled to earth. But here it was, a massive spacecraft wedged firmly into the frozen Thames, one of its surviving occupants hovering next to it, wondering what to do next! Yes a Dalek spaceship had narrowly missed wrecking New London as it crashed into the icy waters. Even the reindeer and penguin on the Thames had managed to avoid being hit (Penguin on the Thames? is this evidence of a new ice age? scientists please take note!), it looks like a bit of a Christmas miracle! Kat and Laredo will have a lot of clearing up to do, it's lucky that scrap metal is worth so much now though, they should get quite a few bob once they wrestle the ship away from the remaining Dalek!
I walked away from the 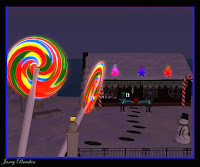 spacecraft and spotted a lovely winter house with some giant lollipops and toy soldiers guarding the door. Santa has called early this year, I hope the Daleks hadn't given him a lift! Inside the cosy decorated house there are lots of free gifts for people to pick up, what a great idea! Go over and see what you can find!! 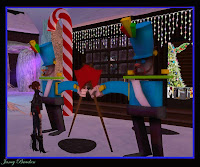 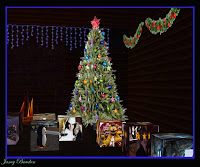