The Royal Albert Hall In The New London Village 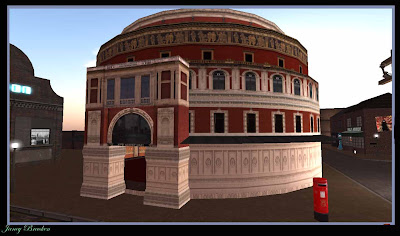 The Royal Albert Hall in Knightsbridge is perhaps one of London’s greatest feats of architecture in the Capital, a great round domed building, looking every inch the centre of the arts. Well this should be hard to re-produce in SL, but Kat Kassner and Laredo Lowtide have done just that in the New London Village sim. Their version is as much true to life as you can get in-world. It makes a lovely eye-catching feature to compliment the rest of their fantastic London builds.

The real Royal Albert Hall is best known to people as the place where the proms are held each summer and this has taken place since 1941. The Hall was supposed to have been called ‘The Central Hall of Arts and Sciences’ but Queen Victoria had other ideas! She changed the name to the ‘Royal Albert Hall of Arts and Sciences’ in memory of her deceased husband and consort Prince Albert whom she had adored.

The Albert Memorial isn’t too far away from the Royal Albert Hall, but Kat and Laredo have their own version of the monument. Instead of the real life temple type memorial to the Prince, Kat and Laredo have a large decorative ring on a plinth. Now this ring could be recognised as one used for piercings, and I will leave this to your imagination about where Prince Albert is rumoured to have had his famous piercing……..

The virtual Royal Albert Hall will be used for events in the New London Village and it will be a fantastic venue! 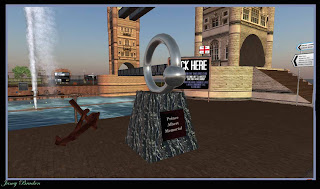