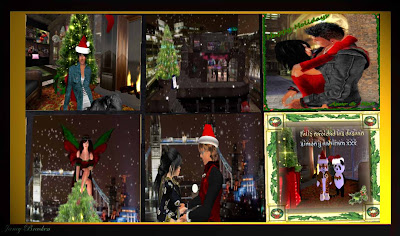 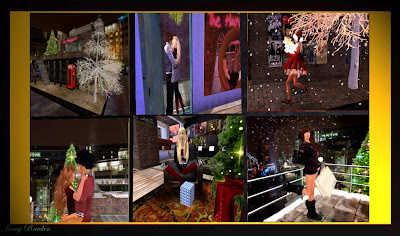 There are some lovely pictures in the HangOut. Owner Janis Short wanted people to take photographs at the club (you have to be a group member) and she has been hanging them in the lounge area on the first floor. Janis has also been paying L$100 to each of the photographers too. We’ve got some very festive photos so far, everything from couples posing, to shots of the club itself. I went over to take a picture and thought I would be the Christmas Fairy on top of the tree! I can’t tell you how many times I banged my head on the ceiling trying to sit on the top of the ‘phantom’ tree! Ouch!! but I got there in the end. There are some really good shots, Seany succeeded where I didn’t, and managed to sit on the floor by the fire, (I kept ending up on the couch when I tried to sit on the floor!), Simon and Nahiram look extra cute in their tiny tiger and panda avatar outfits. Pumpkin and Tom looked really romantic in their pose with the backdrop of Tower Bridge, as did Asurmen and Kailai with that special hug in the alleyway. Robyn looked like she was hurrying back into the club with some nice hot pizza’s for lunch and Skye looked like she had been Christmas shopping. Dottie and Gold gazed into each others eyes celebrating their first days as newlyweds and Janis and Morrissey got together in a great kiss under the mistletoe! Nils took a fantastic shot of the club in all its Christmas finery. I’ll be going back to check again for new pictures, so get your camera’s ready for some HangOut shots!
Janis has a new gadget in the club too, it’s a brilliant board which tells you the artist and the name of the song that is playing, the club is as popular as ever and everyone loves it! 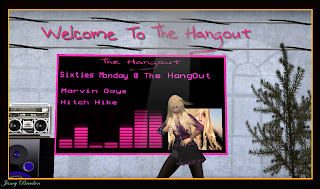