Angels and Demons at the New West End Club 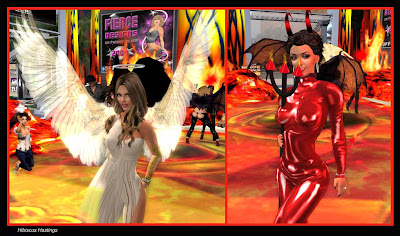 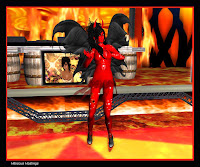 West End Club. It was angels and devils night and spectres of all types danced next to celestial beings who were endeavouring, perhaps in vain, to save the endangered souls of those who in the club. It was a monumental task.
Poor host Cutewillow Carlberg began the evening by sending out a desperate message saying that DJ Brie Janick had gone over to the dark side and was trying to drag her down, too. Immediately, heavenly and devilish creatures descended on the club, which was engulfed in flames. The floor was molten and there was a definite scent of brimstone filling 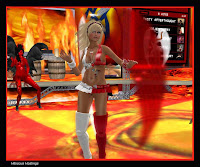 the air. The forces of good were outnumbered, but the angels remained strong right to the end of the evening. (It should be noted that of the three members of Virtually London (lite) who made it to the club, two were angels)
DJ Brie played music which had burned up the charts. It was “Hot Hot Hot”. She took requests, but somehow missed one made by Simon Seurat, for some hymns. No doubt the angelic Simon was trying to save his love, nahiram Vaniva, who was looking hot dressed as a naughty red devil. But Brie was having none of that, as she, too, had unleashed her mischievous side. So the angels had a real challenge.
Who won? That remains to be determined. One puzzled soul, barbie Bohemian, couldn’t seem to decide, although it is feared that by the end of the evening she may have been pulled down to the netherworld. The only way to solve this dilemma is to have a rematch sometime in the future which will no doubt be a clash for the ages. 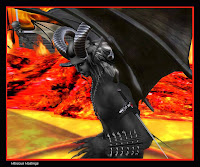 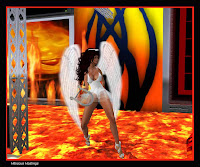 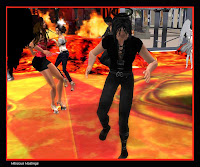 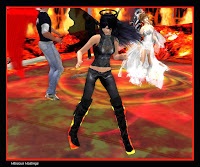 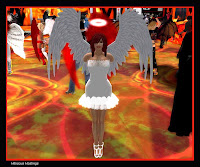 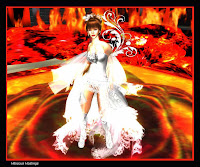 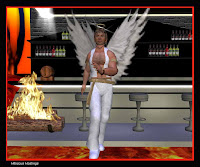 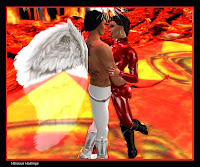 Email ThisBlogThis!Share to TwitterShare to FacebookShare to Pinterest
Labels: Angels and Demons, devils

So Hib, you and Ed were Angels! be afraid, be very afraid!!! hahahaha

I'm always an angel! There's nothing to be afraid of!

BRIE draged me to the dark side
giggles cute

Hib did the same to me Cute, but she still makes out her and Ed are angels!!