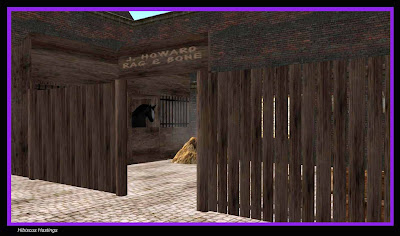 Nowadays we are all aware of recycling. Many of us separate our household 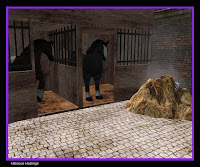 waste into recyclables and non-recyclables which is then picked up at our doorsteps. But did you know that this is not a new idea? I discovered just how long this has gone on while visiting Whitechapel 1888, where owner Spooks Blackburn has created a rag and bone yard.
Rag and bone men have existed since the middle ages. They would travel around a city, ringing a handbell and calling out “Rag and Bone” hence their name. The rags would be used to make fabric or paper while the bones were used to manufacture glue. They also collected scrap metal and old furniture which could be traded. The better off rag and bone men would have a horse and cart; others less well off travelled the city by foot, carrying a sack in which they collected t 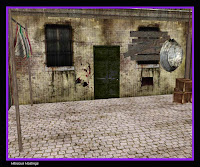 heir goods. The horse was of such value that the rag and bone man would go without food if there was only enough money to feed the horse. The rag and bone man in the Whitechapel sim appears to be relatively well off, since there are two horses in his yard and a tin bath!
Rag and bone men would sometimes hand out balloons to children who gave them lots of rags, however this was stopped by the Public Health Act 1925 because there was concern about the spread of disease.
With mechanization and the changes in work habits, the rag and bone men have largely disappeared. Those who remain usually have a truck instead of a horse and cart, and collect mostly scrap metal and small appliances.
.
.
Hibiscus Hastings
Posted by Janey Bracken at 00:05

A nice article Hibs. The Rag and Bone man trundling through the streets on his cart, ringing his hand bell and calling out, 'rag 'n bone' (or something like that) has been a London institution for many years. School boys would sometimes hang on to the back of his cart invoking cries of 'whip behind guv'nor' from the passers-by. BJ

The most famous rag and bone men in the UK would be Steptoe & Son, characters in the hugely popular BBC sitcom of that name from the 1960/70s. It was set in Shepherds Bush in London and their horse was called Hercules. I believe it was remade in the US as Sanford & Son and was also a success. Nice article Hib :-)

I know that paper used to be made from old rags , presumably bones could be converted to fertiliser ?

From what I understand the bones were used for glue, whether or not they were used for fertilizer, too, I don't know Simon. Thanks for your comments everyone.