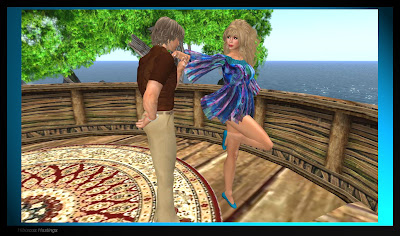 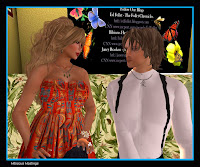 tually London (lite) community; indeed it is hard to imagine our group without them. They bring energy, openness and a strong sense of fun and humour with them, but most notably they display their devotion to and love for each other wherever they are. So at Virtually London (lite) we were delighted when they accepted to be a part of our “Spotlight” series. As Truths said:
Truths Marder: oh no! exposed?
Hibiscus Hastings: lol yes
Truths and Princess first met in another virtual world in September, 2007. Princess was trying to find her way around, with some difficulty, when she heard a voice say “Can I help you?” She responded “God yes help “. Princess continued “(Truths) proceeded to show off lol ... I was hungry to learn everything 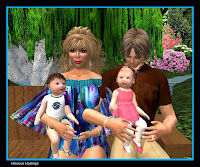 ...and couldn’t wait until I saw his name come on... I don’t think we have been apart since that day”.
Truths was equally struck. “I kept trying to think of everything I knew (all of 1 week older), just to keep her attention... she learned so quick, wrote stuff down, I was captivated”. Princess added “he was smart, made me feel excited to talk and learn from him”. Around Thanksgiving, or just before, Truths asked Princess to marry him. They were married in December “in game” by a Justice of the Peace, approximately 4 months after they first met and then had their first RL meeting a month later. Princess said “our minds fell in love long before we saw one another... we knew we had to (meet), it hurt too much to not touch and meet”. Every year they remarry on their anniversary.
In April, 2008 Truths and Princess migrated to Second Life. They discovered the London sims after being told by a friend about DJ Tallie (Talliesin Silverstar) who 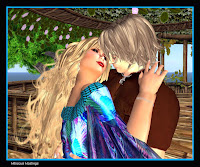 was at that time working in the Underground Club. As Truths puts it they came for the music but stayed for the friends (plus the great music and atmosphere). Over time they have had 5 different homes in SL. Truths does the landscaping and Princess turns the house into a home. They are now expecting their third SL child in September, a girl named Lily May, who will join sister Ariel Rose and brother Max Grace. Their children “are our outward evidence of the inward emotions we genuinely feel about our real love.”
In addition to having a busy family and social life, Truths has performed wedding ceremonies in SL. This began when a friend asked him to stand in for a missing preacher and “t 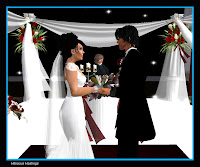 he rest is history”. Truths describes this as an avocation, not work, he receives no remuneration for it. In his words “Marriage, even here, fulfills real emotions, desires and needs.”
As mentioned before, Truths’ and Princess’s relationship has moved to RL. Neither expected this when they first went online. Truths had been alone for 10 years and thought he was “comfy with that”. Princess, too, was not expecting to find such a meaningful relationship. But that all changed, and now Truths frequently makes the 10 hour drive it takes to be together with his Princess. He says “make no mistake...we are real people living a real love on SL. There's no pretending around us or between us. "R 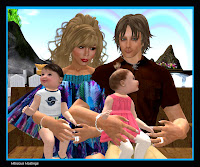 /L vs. S/L" isn't an issue with us, they are one and the same. SL allows us to add to our real love everything we feel, everything we desire, and everything we really are all about.... A wonderful SL is gotten the same as a RL: be nice, play fair, be loyal, don't be selfish, love and forgive, smile and share sunshine. Life is about others, not yourself. Love and the relationship between two people is a blessing, a gift. Like a garden found, love is to be tended, tenderly and with constant purpose. Even SL love cannot be wished or made up. There is fragility and strength, peace and roaring flames. 100% same page communicating is critical. Nothing held back, no interests or time for anything but the other and thereby the one which two make.”

A lovely article about a lovely couple from which emanates beautifully, the affection and devotion they show to each other that brightens all of our second lives. Thanks Hib for this, and thank you also to Princess and Truths.

I can't imagine life in SL without Truths & Princess. When they're not around they are truly missed. When they are around, they always make you smile...a lovely story about a beautiful couple.

Thank you for bringing Truths and Princess’s story to us Hib, it’s a wonderful article about a much loved couple and lets us share their joy. An absolute pleasure to read!

I know these two and there love always show's thought all they do. I am happy to have known them as long as i have and to have been apart of there sl lives. you could not have picked a better couple to write about.

This is a really moving love story. It is so good to hear TruthsPrincess and Truths telling how much love they love each other. Keep up with it, guys!!

Thanks, Hibs, for another well told Spotlight story!

you could not meet a better couple they always make me smile and what a great story hibs :)

I am very proud to say that Truths and Princess are my FRIENDS.
I remember when i was new to Second Life almost a year ago,the Truths both welcomed me to this comunity so warmly. I would be truely lost without them as my Second Life constant. They are great friendly people to know who will accept anyone into their world. I appreciate them as a epic romance and a wonderful couple.
THANK YOU TRUELY for your kindness Truths Marder and Truthsprincess Baramm.

It has been heartwarming to read all the comments that have been posted here. What particularly stands out to me is that the words "love", "lovely", "much loved" and "couple" are repeated over and over. What can be better than to see love, partnership and friendship touching all of us and enrichng our lives, rl and sl. Thank you so much Truths and Princess and everyone who commented. xx