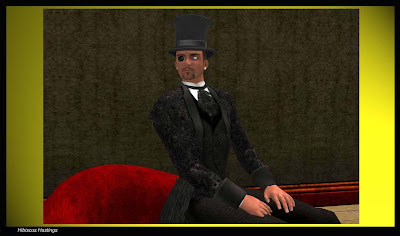 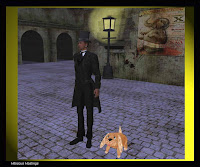 ondon (lite) has re-visited the sim a number of times, learning about the history of that part of London and enjoying the atmosphere of the sim, so it seemed to us to be the time to discover a little bit about the enigmatic and elegant Lord of Whitechapel 1888, Spooks Blackburn.
Spooks first came to Second Life over two years ago after hearing about it from people he knew at work. He had had some experience in World of Warcraft, but found his first log on to Second Life “a bit of a shock”. Nevertheless within a few days he knew he wanted to open a shop and began to look around for a place to do this. It was at this time that he met Cliff Chesnokov, a mall owner with whom he became friends. At first Spooks sold “anything and everything I was learning to build” but “after a while I thought I would like to have a place to rent shops but wanted it to be a high street not a mall so Cliff rented me a small bit of land 2048 and I built Bucks Row.” (Bucks Row is the name of the street where the first victim of Jack the Ripper was murdered)
Cliff decided to have a b 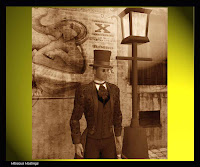 reak from SL so he sold the land to Spooks. However, the plots around Bucks Row were sold to vampires who caused trouble by biting people, so Spooks gave up Bucks Row and took a break from the Spooks avatar for a while. Eventually Cliff returned to SL and bought a sim. Spooks returned to his Spooks avatar and started Whitechapel 1888, which he had always wanted to do since the days of Bucks Row.
In real life, Spooks is from the East End of London. He says “there is so much history here but most people think of the East End they think of Jack so I started with him but also tell of all parts of life in that time.” I asked if he was particularly interested in Jack 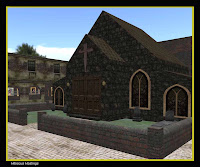 the Ripper and he replied “well I like the history and being from here you are told stories about it as a kid so I have always had it around me if you know what I mean?” but “it’s about how people lived at that time and how hard it was for most of them. My own family have been in the East End for about 250 years so they would have lived like that. Some people come here because of Jack but find out much more. Some like, some don’t, each to there own I say :)”.
He continued on “I don’t plan. I just think “ah I know, I’ll add that bit of history or whatever take(s) my fancy. To be honest I do it for myself because I like if others like it then it’s a bonus I think, but a dream would be to have lots of sims and have other parts of the East end like Bow, the Docks etc ... I have 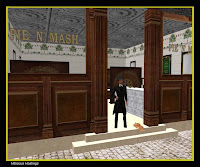 tried to make it with small alleys and passage ways and get the feeling of the real streets like when you walk through a tunnel you feel the cold of the tunnel and the sun when you come out of it”.
Spooks has certainly created that feeling. The sim itself is not large, but because of the tunnels and layout you can wander around, feeling as if you are back to Victorian England, getting lost and thereby making all sorts of fascinating discoveries. Not only is there information on the poor victims of Jack the Ripper, but also on some of the buildings of the time and on the way of life in general. For instance Spooks has created the Frying Pan Pub, part of Ripper history, but when you enter it you can find information on the matchstick girls and the first real strike in England. (go visit the pub to find out) And there are many other interesting corners to the sim. One of my favourites is a small market selling fresh vegetables, meat and ice cream (bugs legs, anyo 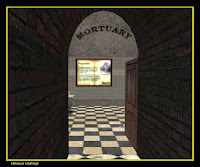 ne?). But perhaps my favourite part is the beautiful Eel and Pie Shop. This is by far the grandest looking building in the sim, and a lovely place to sit and have a chat and a meal with a friend. As Spooks says “its not all bad news in the East End :)”.
Whitechapel 1888 is clearly a labour of love for its owner. Great attention to detail has gone into its creation, but even more, one feels the empathy and compassion for the people who lived in the area during the time of Jack the Ripper , which is really the foundation of the sim. It permeates Whitechapel 1888 and gives comfort.

So how to sum up a place with rats running over your feet, a few bodies scattered around, a police station, hospital and mortuary, a nice pub, some art galleries and a beautiful restaurant? Well, to quote Spooks “come and see it for yerself and make yer own mind up :)”
.
.
Hibiscus Hastings
Posted by Janey Bracken at 05:26

Great article Hib, Spook's Whitechapel 1888 is one of the most interesting sites you can visit. If you are interested in London's history in respect of how ordinary people lived it's brilliant. Congratulations Spooks on a wonderful site and you really deserve this spotlight!!

An excellent article Hibs, you have really put Whitechapel on the map and well done Spooks for your excellent portrayal of this area of London in the 19th century. BJ

I would like to thank you Hibs for doing a great job on letting people know about Whitechapel 1888.
Also Janey and Boye for all there help too, Virtually London (lite) is one of the best blogs for SL. I am proud to know you all
and be a part of it.
Spooks

Thank you all for your comments. Whitechapel is such an interesting sim, as you said Janey it is a great place to learn about the history of London and the lives of ordinary people there. You get a real feel for the period. Thanks again, everyone.