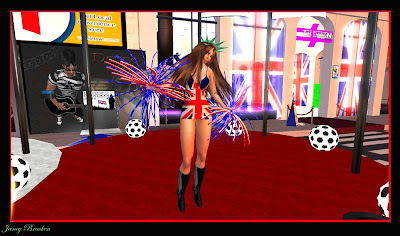 There was a lot goi 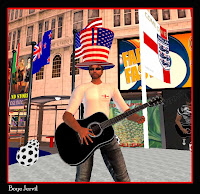 ng on in the London sims on the night of the first England match with America in the World Cup. It looked like a sure thing when England slammed the ball into the back of the net in the opening minutes of the match, but the USA proved to be more than a walkover for England as they fought back, scoring an equalizer just before half time! I was cheering for England as my friend Drax Ember was cheering for the USA as we stood together in SL. We were at a street party in virtual Knightsbridge, a special party for the World Cup match was put on by Knightsbridge Manager Angelique Macarthur, as we were entertained by great live SL singer Deuce Wirefly. Deuce sported his USA hat just as I supported the England team by wearing my St George hat, and many of the crowd were dressed in their team’s colou 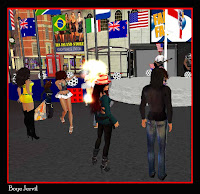 rs too. Angelique chose her outfit very carefully, she looked stunning in a Union Flag dress with a Statue of Liberty hat and she waved some USA type cheerleader tassles!
We had started celebrating the night before at the The Doctor Who New London Village sim where owner Kat Kassner and manager Laredo Lowtide put on a wonderful party in the square in front of the famous virtual Big Ben clock tower. People were dressed in a colourful array of World Cup costumes and Kat and Laredo were giving away free flags of each country taking part in the football.
After Angeliques fantastic 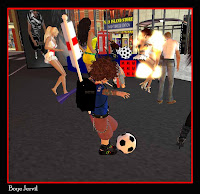 street party we headed over to the West End Club and Brie Janick was dj’ing along with Nahiram Vaniva who was hosting. They had a competition for ‘Best in World Cup costumes’, the venue was packed and everyone had a brilliant time. The winners were barbie Bohemian, Simon Seurat, truthsprincess Baramm, Jim Leckrone, taylor Mialifo, spadylexy Mellison, Truths Marder, Guus Brinner.
Well the match was a draw and we will have to wait and see what happens with the next round. The night’s events were really good though, even people not all that keen on football enjoyed it all! 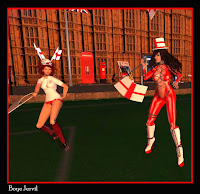 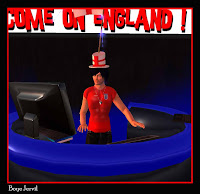 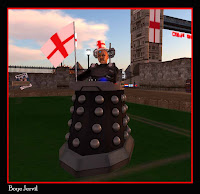 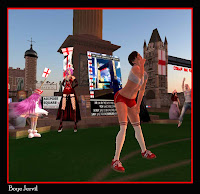 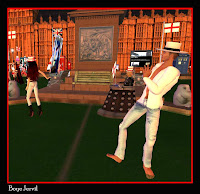 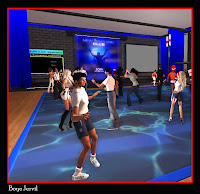 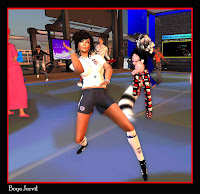 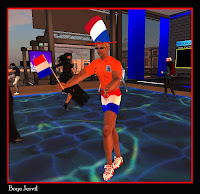 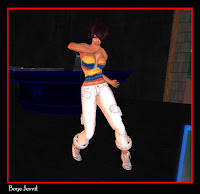