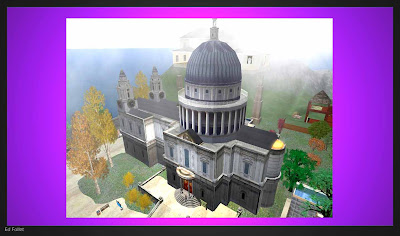 St Paul’s Cathedral is perhaps one the best loved London landmarks yet it is missing from the major London sims in Second Life (SL). However a virtual recreation by avatar Lian Hornet of this beautiful building does exist on the SL grid at http://slurl.com/secondlife/Grace/72/223/128. The exterior is a well built accurate portrayal and the interior ornately textured if sparsely furnished. It’s well worth a visit as part of any virtual London sightseeing tour. 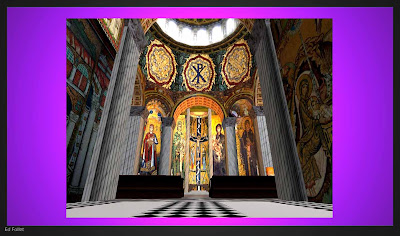 In real life the Cathedral Church of St Paul the Apostle - to use its full name, has overlooked the square mile of the City of London since 604 AD. The current Cathedral - the fifth to occupy the site - was designed by Sir Christopher Wren and built between 1675 and 1710. Its predecessor was destroyed by the great fire of London in 1666. 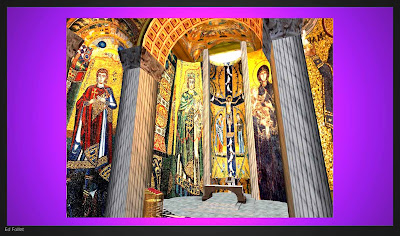 The first Service took place in 1697. Since then the cathedral has been used for many great state occasions including the funerals of Lord Nelson, the Duke of Wellington and Sir Winston Churchill. The Jubilees of Queen Victoria and King George V were also celebrated and most recently, the Golden Jubilee and 80th birthday of Her Majesty Queen Elizabeth. Royal marriages are usually conducted at Westminster Abbey, but that of Prince Charles and Lady Diana Spencer was held at St Pauls in 1981. 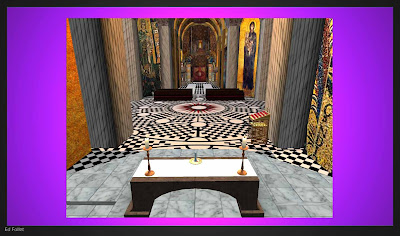 The Cathedral has changed over the centuries reflecting the shift in tastes and attitudes, but the history of the nation is contained in the carved stone of the pillars and arches and is celebrated in its works of art and monuments. The magnificent mosaics are a response to Queen Victoria's complaint that the interior was dreary and dingy, and the splendid 1695 organ that Mendelssohn once played is still in regular use. 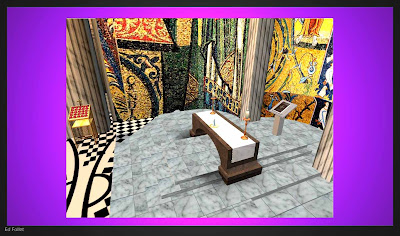 An American Memorial Chapel stands behind the High Altar in an area that was bomb-damaged during the Second World War. It serves as a gesture of gratitude to the 24,000 American war casualties who gave their lives in that conflict while serving in or from Britain, and was paid for entirely by the people of this country. 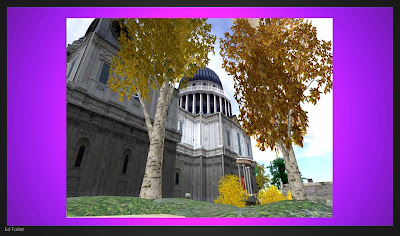 St Paul's remains a busy, working church where people come to find peace and to worship. It is a important heritage site which attracts hundreds of thousands of visitors each year, a symbol of the great City and Nation it serves.

It is always interesting to learn about the history behind such great buildings as this. Thanks so much Ed for letting us know about St. Paul's in SL and in RL.

Thanks for a great article Ed!!

Thankyou Janey and Hib, I hope to find more great builds in SL to report on.