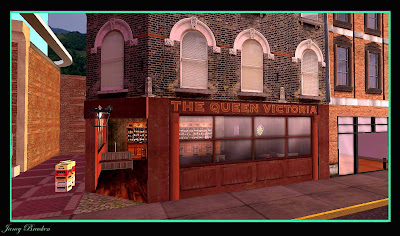 Have you ever wanted to be a real Londoner, even if you’ve never step 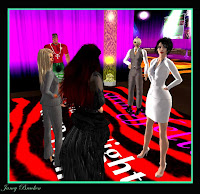 ped into the Capital in real life? Well Katrina Pascale has a fantastic London sim where you can role-play to become a London inhabitant. Katrina’s Little London offers both views of London Life, the wealthy side with a little bit of the urban jungle thrown in.
Just imagine the scene in Katrina’s Little London. The people go about their daily business in the graffiti littered careworn streets of the inner city suburb of London, hurrying on their way, careful not to make eye contact with passers-by, walking quickly as they become aware of the footfall behind them of someone getting that little bit too close, wary that it may be a stranger after quick money to feed his or her drug or alcohol habit for the day. It’s a good idea to cross the road if you see a street gang hanging around on the corner, you never can tell if a street fight may break out! The tatty sweetshop with its dusty metal shuttered windows does well for trade as people drop in to buy a newspaper and a packet of fags as they pass by. The Queen Victoria Pu 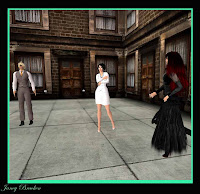 b has its regular crowd of punters who drop in for a pint or a gin and tonic after a hard day. By contrast, if you want to go up West you can stroll through the nicer areas of London stopping at the Manhattan Cocktail Lounge to relax and plan your shopping trip to the smart upmarket shops!
In Katrina’s London you will find many familiar names, Paddington Green, Lambeth, Chelsea, Waterloo, Bayswater, Camden, Knightsbridge and more. She also has an NHS Hospital, a Fire station and a Police station. There's a working tube train system as well.
Fellow writer Ed Follet and friend Isobel Byron had discovered Little London as they explored SL and I went over to see for myself. Ed had met Councillor Steve Rumsford who has a very stylish nightclub in the sim called Strongfellows. I met Steve and Starbuck Jinx, who are both London Councillors, as well as resident OLLIE Tigerauge. Soon sim owner Katrina Pascale joined us, she looked very elegant in her sm 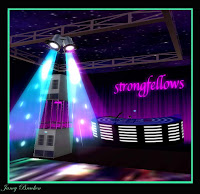 art white suit. Katrina and Starbuck kindly showed me around. We stopped at an outside smoking area and puffed on our cigarettes and chatted and Katrina told me “I try to encourage a real city atmosphere” Katrina explained “I decided to give the sim a flavour of London rather than recreate one certain area such as the West End. So the sim is not 100% accurate it's more an amalgam of areas of London.” She added “We are trying to be inclusive and have something for all.”
I asked Karina about the role-playing side of Little London, she told me “We want people to enjoy the City and become part of it. Even if it's as simple as sitting in one of our coffee shops and chatting to a friend. Good RP is based on the people, and the characters they portray, rather than the surroundings. So anyone is welcome.” When I asked her about the poorer side of Little London she said “people are free to establish a character or personality in any w 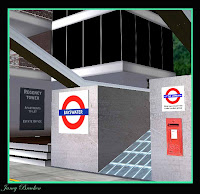 ay they see fit. For example the East side of the sim we encourage more gritty urban roles than say over in Regent's Park.” Katrina added “We have everything a real City has, from restaurants and bars, through to large nightclubs, we also have a hospital, fire station, parks and open spaces, and of course proper pubs!” And did she have a favourite part of Little London? Katrina said “I'm particularly fond of the parks and the large boating lake. Although we are in essence a city it gives a great feeling of space.”
Katrina has been in SL for over 3 years and says she first found out about it via an article in the Sunday Telegraph. She said “I tried SL the same day as reading the article and was hooked immediately. Initially I explored and took part in other RP sims. After about 18 months I taught myself to build, with help from some very good instructors and mentors I wanted to try my own large project.” I asked her how she got 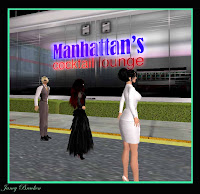 the idea for Little London, she told me “I wanted to build something based on my own life. The things I see every day. I deliberately wanted it to be UK based. As for the planning, the initial road plan and building plan was put in by myself and a very good friend, Mintyman Criss, who designed all our roads, paving and civil builds. Once that was complete I then took over installing the rest of the buildings.” It had taken Katrina round 2 days to come up with the plan and with Mintyman, she says they “slowly brought it to life over about 8 weeks.”
Katrina values the view of the inhabitants of her sim, she told me “I own and maintain the sim. Apart from myself we have an elected Council to decide 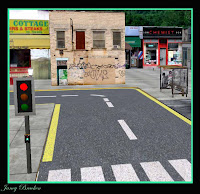 on any changes or developments. We also hold regular Citizens meetings where any member of the community is free to air opinions or table ideas for the sim.”
Little London is a great place to live or open a business, a simple apartment costs L$100 a week, rising to L$1500 for a luxury fully furnished home. Shops start from L$200 a week.
I asked Katrina how she saw the future for Little London, she said “I would like to see the sim grow and develop with a strong sense of identity and characters. The City is only a backdrop. It's the people that bring it to life.”
Katrina has so much energy and enthusiasm for her very own London 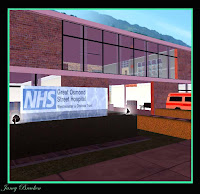 and from what I saw of the residents there, they simply love it. Katrina also has her own amazing blog all about Little London, which she updates weekly with events and happenings. Go over and see for yourself and don’t forget this is role-play, so you will need an observer tag at first, but I’m sure you will soon feel at home in fantastic Little London.
Janey Bracken
Posted by Janey Bracken at 01:45

This is a great sim Janey, the builds are amazing considering the amount of space there is, I'm sure it will be successful and expand. The RP is a new experience for me, a different type of community where everyone contributes. It will appeal to those avatars that are looking for more than just a place to hang out and chat or dance (of course it is that as well). Good Luck to Kat and her team.