Watch Out 'Arold Doesn't Get You!! 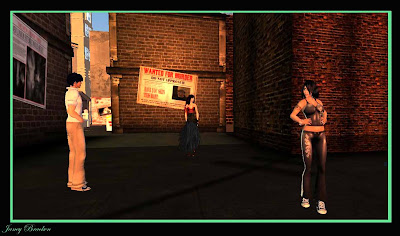 in!! There is a rough looking character on the loose, and from his picture on the wanted poster I would say it’s best not to approach this man (as the police always say about someone who looks really dodgy!!). I had gone over to New London and there I was being nosy when owner Kat Kassner and Manager Laredo Lowtide came over to warn me that I was on the ‘less classy side of the river’. Hmm well, springing from the South East of London myself, I could either be offended or agree with them, and as it was I had to agree!! Laredo explained that he described this part of New London as “the more colourful part” which is really a good way to describe it.

He said it is “Earthy, diverse, a little violent”. Well I eyed up the person in the poster and decided I would not approach him if I came across him after all!

Kat and Laredo are creating a community in their sim and they want the right mix of people to feel at home there. In fact with rents as low as they are offering, even the poorer people of the Parish could afford a house in New London. You get a 40 prim allowance for just 80 Lindens a week. Of course you have to keep your door locked and bolt your windows to keep the resident psycho out! They told me his name was Harold, but he likes to be called 'Arold so he has an excuse to make

sure you never call him that again! Being that I drop my h’s occasionally, well what cockney doesn’t, I might have to be careful should I meet him! Loredo told me it was ok, Harold is one of the staff and is harmless, but then he added “Oh aside from the resident psycho thing!”

Over in the ‘classy’ part of New London there is a radio theatre and Laredo told me that they had a classic English production of “Star Wars” He explained that “most of the cast and production crew were English, so we’ll call it that.” He said “We normally have Doctor Who running there – we’ve been authorised by the people who make the Who audios to run them.” He said that the radio theatre was very popular, people like to sit down and relax and listen to whatever is running.

Whilst I was talking to

Kat and Laredo we were joined by John Silverweb who, as a rabbit av, was in danger of getting his ears burned in the noon day SL sun and then I spotted Pony Admiral, but only just, he stood right next to us and Laredo said “He does have a vague resemblance to a novelty bin today” And he did, it was only that I saw his name tag that I spotted him. “No one ever sees me! That’s when I strike” he said menacingly. “Oh dear” I replied, “another one to watch out for” I thought! I think Pony is a good guy though, he never did get into attack mode.

So you don’t have to be a Doctor Who fan to be part of New London, you can rent a house and be part of a brilliant community or just go to visit, they have a fabulous club there too and lots going on, but watch out for 'Arold, oops sorry Harold, he definitely looks dodgy!!