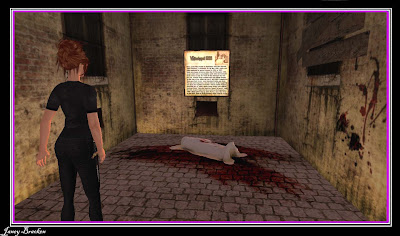 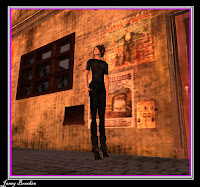 s and one very famous place is Whitechapel. The sim, Whitechapel 1888, is all about the grisly crimes of Jack the Ripper, the Victorian serial killer who murdered five prostitutes in his blood lust days in the impoverished working class area of East London. Although five victims are attributed to him, there may have been another two deaths which happened around that time, but these were not officially linked to the notorious killer.
When you teleport to the Whitechapel sim you find yourself surrounded by the grimy buildings and rat infested alleyways of London. I wandered up each of the alleys, recognising the street names as those of the real area where the ladies of the night’s bodies had been found by terrified passers by. The walls are smeared with blood and you suddenly see one of the bodies, thankfully covered with a blanket, but a shocking sight none the less.
I suppose many of us h 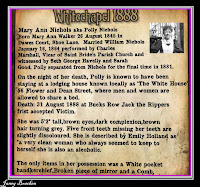 ave been fascinated with the crime, it is still a mystery about the identity of the killer, and his victims are usually shown as mortuary photographs taken at the time of their deaths. The owner of this sim Spooks Blackburn, has added a more human feature, which I found very touching. He has posters on the walls by each victim telling a short history of their life and has added a family photograph of them taken when they were alive. This brings it home to you about how these poor women struggled to get by, turning to prostitution to survive as times were so hard in those days.
The final Jack the Ripper victim, Mary Kelly is found in one of the room 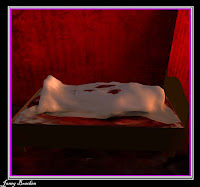 s in the sim and it’s a really nasty sight, poor Mary was truly butchered by the killer and the walls run red with her blood, ‘orrible murder’ the newspaper sellers cried in those days and ‘orrible murders’ they are in Spook’s very interesting sim. If you fancy going back in time to Victorian Whitechapel, be very careful, Jack the Ripper may just be waiting around the next corner.

Wow great story janey :) good to see you including other london sims on the blog its best for all that way

it's really quite comfy here behind the settee.

Can I look yet?

I think it's nice to see what other people are doing with London places too, there are some great ideas out there, and I think Spook's sim was really well done.

Lol, think I'll join you, it is a bit scary there!!

hey janey its really good seeing what else is out there . Loved your story ill def go have a nosey ....Im hiding behind the sofa to with my popcorn and bottle of vodka
Brie

Thanks for your comment, think the idea of a snack behind the sofa is a really good idea, lol!

wonders who it is ynder the sheet :) great story janey :)

Don't know, but I don't think I'll look either, lol, best to stay behind the sofa!!