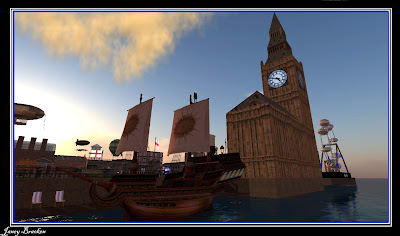 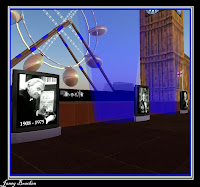 clock tower set against the skyline. You will also recognise the London Eye (a giant ferries wheel by the River Thames for our friends from overseas who may not have heard of it!) and there is even the Tower of London in this fantastic New London Village sim. Wait a minute though! you might see something a little bit different here, there’s an old fashioned police box standing by the side of the road, makes you think, because they did away with those years ago! Then you realise this sim is not only full of all things London, it is also full of everything from the cult television series Dr Who.
There is a lovely memorial site to all the late actors who previously played the famous Ti 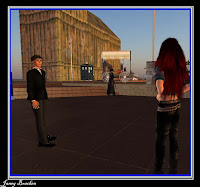 me Lord in the series and many references to the show. The sim is very popular with lots of visitors and I stopped to talk to one of the people enjoying his time there. His name is Professor Verne and he had not been in Second Life very long. I asked him if he spent all his time in Dr Who sims, he told me “Good to meet you Janey, I'm off to look for a tardis. And well, I sort of do right now, but I have only been on for a few days. Originally (I) was gonna be just a time traveller, based on the book The Time Machine, but switched over to a more Doctor Who theme.” And did he like the New London sim? he told me “Certainly it’s a place where I could meet multiple Dr Who fans and have a couple of adventur 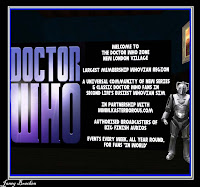 es and it seems like this place is so vast and huge that anything can happen and (it’s) safe enough to explore.”
I left Professor Verne to look around and hoped he didn’t run into any Daleks along the way, but somehow I don’t think he would have minded anyway! A nice feature in the New London Village sim is that all the road names are linked to the Dr Who series and the actual layout of the sim is very well done. If you are a London fan and also like the Dr Who theme you will love this sim, travel through time and space and teleport over there for a look! 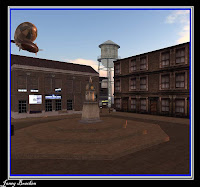 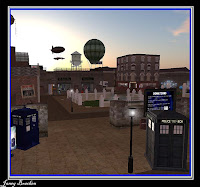 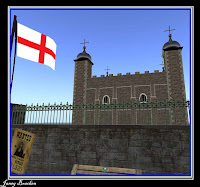 went to see this sim today they done a great job and a nice friendy place.

Glad you liked it Seany I think it's great too!!