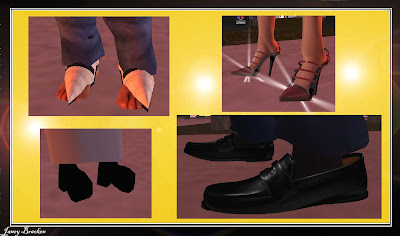 I must admit I love shoes and boots in SL, I saw DJ Janis Short with a fabulous pair of boots she had bought back in December and I couldn’t rest until I had asked her where s 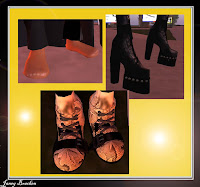 he had got them. I bought them too and love them, they are a thing of beauty (well to me!) and I wear them a lot. I bought another new pair the other day and they have little buckles and laces on that you can change the colour of, they have great detail and are really nicely made. I suppose I notice people’s feet a lot wherever I wander and it was over in virtual Hyde Park this morning that I started to look at the feet there. Just a passing interest you understand, I haven’t got a foot fetish, although I did meet someone in SL a short time ago who did have, he wanted to be my foot slave (whatever that is!) and I had to politely decline his offer, well it takes all sorts!!
I’ve often thought SL feet are ugly, well most of them, I suppose toes are a job to recreate without looking square at the ends, some people manage to do a good job though, there are some brilliant designers out there. What made me want to write about feet was a particular gentleman in the park who looked really nicely dressed with his clothes and hair till I spotted his feet. He had a pair of ‘winkle picker’ shoes on and had obviously left the shoe base off, as his bare feet showed each side of the pointed toes, it looked hilarious. I saw another guy in the greeting area and his shoes were big enough to get another pair of feet in the back of them, imagine that in real life, trying to keep them on as you walked! Another guy had a pair of dirty looking snake skin trainers that looked like they needed putting in his Mum’s washing machine, sort of thing that looked like they would fall apart any minute. Then there was the man with a praying hands type animation who thought he would look spiritual by going bare foot. Oh those strange little toes!! A poor newbie boy stood close by whose pants hadn’t rezzed, so he looked like he was wearing a long grey skirt, but it couldn’t hide those big black square objects that looked like cartoon boots.
One girl had such big platforms on her boots that she looked in danger of toppling over, but still managed to dance arou 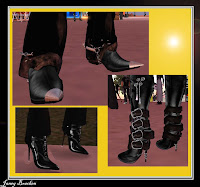 nd without breaking a virtual ankle. I notice that so many of us crave those 6 inch or more heels, that would cripple our poor feet in real life, but that’s the great thing about SL, you can wear anything you choose. I spotted a pair of high heels complete with bling, which were pretty much similar to the first shoes I saved up for by 'camping' when I was a newbie. Not a fan of bling now, but I can see that newbies may be attracted to this type of thing. There were some lovely boots and shoes over the park of course, a guy had a very nice pair of cowboy boots on with steel toe caps and a couple of the girls had some very detailed boots with buckles and laces. I think it’s best I stop looking for a while, if I see someone with really nice boots I’m tempted to ask them where they got them, and before I know it I’m teleporting off to the shop……
Janey Bracken
Posted by Janey Bracken at 15:04

I wish more people would "toe" the line and get better fitting shoes!

Some of them just have no 'sole' and probably don't care!!