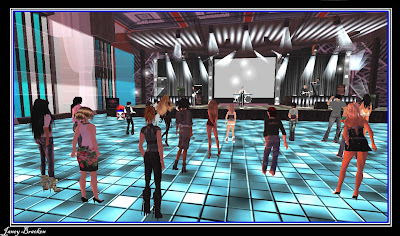 What a fantastic weekend its been for music fans in Virtual London. On 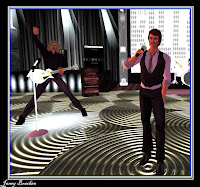 Saturday we were treated to SL tribute band The Killers, which was in The Kensington building and organisers Brie Janick and Seany1235 Blinker had done us proud again with the interior of the venue which looked amazing. There was a big crowd considering it was a Saturday night and the sim was full. It seems like The Killers are a very popular choice and the night was really enjoyable, as the party carried on after the gig down at the Underground Club where dj Gen did an excellent job at entertaining us all.
Then last night we had a real buzz as live singer and Virtual London favourite Maximillion Kleene sang for us in 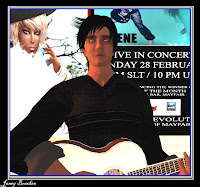 Bogies Jazz Club, Virtual Mayfair. Organisers Torric Rodas and Billy Arentire should be really pleased as the evening was once again a great success. Max, as always, delighted the audience with his warmth and wonderful array of songs, including his haunting rendering of the Snow Patrols ‘Chasing Cars’ The evening was sponsored by SLFone, a Virtual London based company and partners of Debs Regent’s Virtually Linked business. SLfone had been running a contest and Max announced the winner of the competition at the end of the show, an avatar called Butterfly, who won 20,000 Lindens and other amazing prizes. Well done to Butterfly! 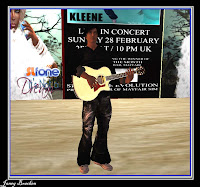 Again the night wasn't over after the gig as everyone headed off to the Coach and Horses Pub to boogie the night away. Great Weekend London Team!!

Email ThisBlogThis!Share to TwitterShare to FacebookShare to Pinterest
Labels: Maximillion Kleene, The Killers