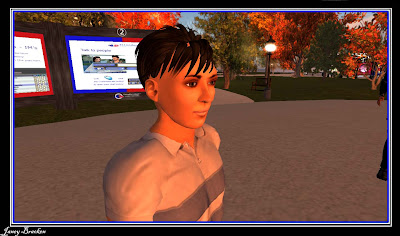 I went over to virtual Hyde Park yesterday and said hello to the group of people gathered by the Dell Café. Isabella Elcano was there, doing a brilliant job as a Greeter and dealing with someone who decided he wanted to upset everyone by using bad language. Isabella knows exactly what to do of course, she is good at dealing with people and she is very popular. This particular person wasn’t going to conform though, and ended up being ejected, someone in the group did say they thought he was 12 years old, so it’s not surprising really that he was a little bit mischievous.
Looking at new arrivals in both virtual London and the rest of the grid, they stand out like a sore thumb, guys in the brown shirts or blue jumpers and the girls in their pink spotty dresses, pony tails swinging as they walk, well waddle, thanks to the Linden’s default settings. It’s amazing how many of them want to know how you know they are new people. You don’t like to say, well you look lik 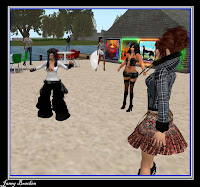 e a clone, or you have concrete hair, or your skin looks like a cartoon. Also the fact that they suddenly stop and go into 'Appearance mode' in the middle of a group of people shrieks ‘Newbie’ to those all around, something an experienced avatar would never do unless under extreme stress!! When this batch of newbie skins came out a couple of years ago the rest of us, who had been SL residents for some time, thought they were cutting edge and really looked good compared to what we had when we first joined. I started as a Goth and my white skin didn’t even look human, but it was all I had so I thought it was great. I think there was a Boy next door and a Girl next door skin too, and you can still see the odd figure of Philip Linden on different sim 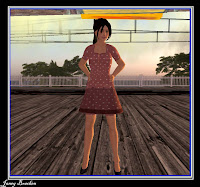 s that has the Boy next door look. There may have been others, but I can’t remember, it seems such a long time ago. The Lindens had asked a group of in-world designers to create the newbie looks that we have today, and at the time they did a great job, but it shows how good skins, clothes and hair have got since. The London greeters are great at helping the new people to blend into the SL society by giving them a new look as soon as they can.
One of the funniest sights are the pink dotty dress girls with their skirts still in place and a pair of jeans on underneath because they don’t know how to get rid of the atta 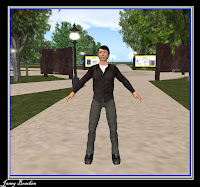 chment skirt (although getting clothes to attach nowadays is something else, you can log on and find it takes you a good ten minutes to get dressed as your attachments won’t attach!). I did see a skirt on my travels that had lost its owner though, so sometimes skirts must have a mind of their own! Also men with ‘see through’ hair looks very newbyish, as they try to wear it correctly, but have big gaps showing their scalp. I saw a guy walking about once with his hair five feet in front of him, every time he move the hair swayed about like a little floating dog. Newbies always seem very short too, or is it that the rest 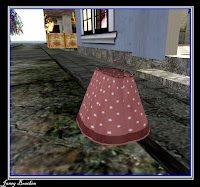 of us are 7 feet tall, I think the SL race of people have evolved into a giant lot of warriors and Amazons, not including tinies and furries of course.
Virtual London is a great place for any newbies to arrive in, as there are so many shops giving stuff away and the new person can create a brand new appearance virtually as soon as they land there.
So be kind to that new person in his brown shirt or her pink dotty dress that you see waddling toward you typing frantically, you were all weird looking once!!
Janey Bracken
Posted by Janey Bracken at 14:43