An Angler's Tale And Some Riverbank Rivalry 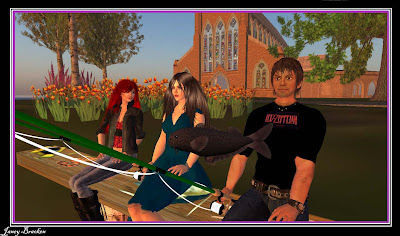 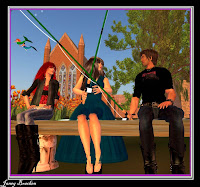 Kensington. I could see two anglers as I got closer to the water's edge. From a distance it looked like a peaceful bit of fishing on the riverbank, but as I drew nearer I could feel a bit of tension and rivalry in the air as journalists Hibiscus Hastings and Ed Follet cast their lines out to see who could catch the most fish. I plonked myself next to Hib on the bench as she reeled in yet another fish. “Blimey” I declared,”it’s a Mama Flame Angel Yellow Fish” “Yes, aren’t you jealous?” my colleague Hib said back, her eyes glittering with yet another prize pulled from the water! Ed sat in silence as Hib’s couple of fish swam 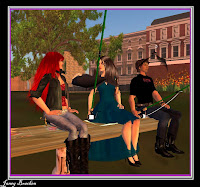 around her head, the other one was a handsome black fish with kissy lips. Hib also declared she had caught a lobster “that was good for dinner” Poor Ed went off to the other side of the pond as he didn’t seem to be having much luck, whatever Hib had on her hook for bait seemed to be doing the trick!
Ed came back later and sat down again next to Hib as they glared at each other, crossing rods, it was a good job they didn’t have swords, as it looked like a fight was about to kick off! Then Ed got a bite, reeling it in I could see he’d 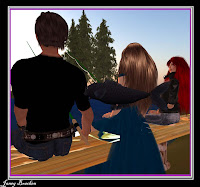 caught a Common Fish, a Blue Betta, but he did go on to catch some rarer ones too. Hib then caught some plankton, which looked like tiny blue people floating around her head, I think 'kissy lips' fish liked the look of those as he sped around after them. Hib pulled a brightly coloured goldfish out next, saying “I like the goldfish, she is very pretty!” There was just no end to this woman’s fishing talents.
It turned out that Ed had been successful as well, but he couldn't rez his fish, so I couldn't see his catch! I had a pair of little mermaids that I got from my inventory, I didn't catch them, but I thought it might make the two anglers a bit green with envy. I got glared at by both of them so I decided to log off before they bashed me with their fishing rods! 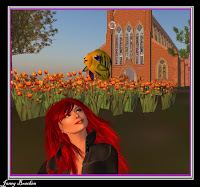 What can I say, I caught a lot of fish. Talent? Beginner's Luck?

You reely caught the mood there Janey. Of coarse being a sport, I let Hibs of the hook and made a rod for my own back with the net result that I will now get much spinning of lines abait the one that got away. :-))

Hi Hib, Good job you are the reserved modest type, or I would have thought you would have rubbed it in! poor Ed!

Yes, those puns leave "casting" about for a rebuttal!

Oh No!! Drax has found the puns, everyone dive for plover!! (ooops that's a bird, sorry!)