A Real Romance - Brie and Seany 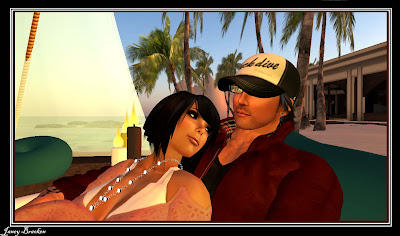 I’d heard some upsetting news last year, one of the nicest and happiest couples in SL had split up and it looked like it was final. I had been following Brie Janick and Seany1 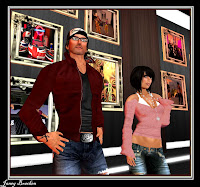 235 Blinker’s romance from my first meeting with them in Virtual London nearly two years ago. They had met and fallen in love and married in SL and they just seemed so right together, so it came as a shock to a lot of us that they had parted. I didn’t want to say much to either of them about what had happened, but I secretly hoped that they would get back together, and get back together they did! Their friends were delighted and New Year’s night there was even more wonderful news, Brie and Seany announced that they are to be married in real life. Brie was staying at Seany’s real home over the holidays when Seany popped the question. I asked them about their engagement and their very special Second Life/Real Life love story.
I wanted to know about 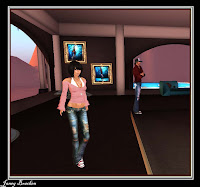 the proposal, Seany said “I proposed to Brie, we both sat drinking a bottle of wine watching Big Ben and the fireworks. I was nervous and anxious. When Big Ben chimed midnight I got down on one knee and asked Brie to marry me. I was crying she was crying, was very emotional.” Brie agreed, saying “I was happily watching the tv we did the countdown together then I saw him move and get down on one knee, my heart stopped, I was thinking omg what’s he doing, then he asked me to marry him. And I was half crying half trying to talk. After we sealed the deal with chocolate cheesecake, what girl could refuse that!”
Had Brie any idea that Seany was going to propose? She said “I had no idea, was 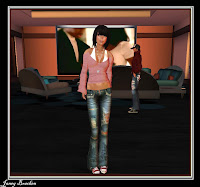 a complete shock.” Seany added “I had it planned before hand as I knew Brie was coming down to spend New Years with me. I had been thinking about it for a while but waiting for the right moment.”
Since they had already married in SL I wanted to know if a real wedding had always been in their thoughts, they told me “When we both first joined SL we said from day one this will never be real life. Looking back seems so long ago. Over time we knew we loved the person who was behind the avatar. We decided ok this is serious.” Brie said “He was the first person I thought of when I woke up and the last person I spoke to before I went to bed. I knew after a few weeks this guy is the man for me.” Seany told me “Marriage wasn’t anything we thought of to be honest, we knew we loved each other and wanted to be together forever. So I though ok I love this woman and I want to be with her for the rest of my life.”
I asked if being married in SL meant the same commitments as real life, Seany answered “The way I look at it, it doesn’t 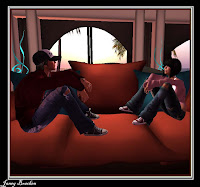 matter because I know the real Brie and that’s the person I see when I see her avatar. I am committed to her in SL and rl.” Brie continued “Yes the day we married on SL those vows I said felt real. I didn’t see Seany the avatar I saw the real life Seany.”
Asking them about the time they parted for a little while, I wanted to know how it felt to get back together again, they told me “We both went through a difficult time in our real lives and decided it was best to sort those out, but to be honest, we never were apart . We were always together in SL, always on the phone, but finally saying ok, I can’t be without u in my life, scared us and we will never be apart again.” I asked them if they thought the stresses of SL might have contributed to their parting, as they both work in Virtual London, Brie as a Director and Seany as a Manager. They said “Yes SL is very stressful more than Real life at times. With the jobs we have, sometimes the pressure is a lot. But we ma 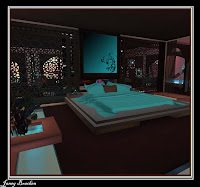 ke sure that we have ‘us time’ everyday. In the beginning it was hard to separate the 2 but over time we have learned to say no it’s our time now.”
Getting back to that very important topic, the wedding, I wanted to know if they had set a date and what sort of wedding it would be. Brie said “Well we can’t have a church wedding because we are diff(erent) religions so location would be something we will sit and talk about. if Seany had his way we would have it in a kebab shop with kebabs for everyone to eat, but I'll put my foot down for that. The date we will be setting soon, Seany will be down here with me in Feb for a week and we will decide then.”
I asked them if they would be renewing their vows in SL, Brie said “On our 2nd anniversary on April 6th we will be renew 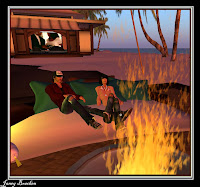 ing our vows. In the Kensington building as it’s my fav London building and designed by our dear friend TD (TD Reinard).” Brie said that they will also celebrate their real life engagement at the same time.
And what about the future when they are married in real life and have to log on to SL in the same home. Brie told me “Seanys just said u ain’t touching my pc tut tut he needs obedience school before the wedding I think lol. Yes we will be on SL, still on as it is a big part of our lives. He can just be in another room hahaha so I can’t nag him what u doing where are u, rofl.”
I went over to Brie and Seany’s virtual home to take some photos, and just as I suspected, it is beautiful and exquisitely decorated. Brie has her own gallery where she displays her SL photographs and she is a very gifted photographer. I wanted to know if they had similar tastes in décor and who chooses the colours and furniture. Brie said “I do it all, he just nods and agrees and says that’s nice dear. I’m always changing things in the house ..his re 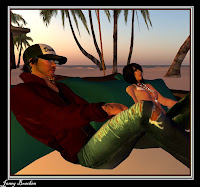 sponse is always ‘will I come online and find a new house?’ as I change them like shoes. He says my inventory is where old houses go to die lol. In real life we have very similar tastes. I decorate and he agrees sshhh I didn’t say that lol.”
I asked them if they wanted to add anything, Brie said “Looking back from when we first started lol, especially our avatars ...what was we thinking lol, Seany’s first look was punk rocker. I think over the last years we have grown as people and as a couple. We don’t see the avatars we see each of the people there.” She added “I see Seany’s face when I look at him, strange. He’s my angel and my soul mate. I never thought I’d find true love again, but I say it found me lol. But what’s been amazing is that we have 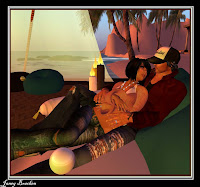 made some friendships for life and people have followed us really over the 2 years and supported us, for that we are truly thankful.”
Seany said “Meeting Brie in Second Life was the best thing in my life, getting to know her I found she was a warm hearted and caring person and it was not long before I found myself falling in love with her in rl, so when she said she felt the same I was so happy. Nearly 2 years on I thought it was time to pop the question and New Year’s eve seemed a perfect time to do it, she said yes and I was so happy, I cried, I love Brie with all my heart and always will she is my soul mate.”
Congratulations to Brie and Seany on their real life engagement, it was the most enchanting news ever to hear of their wedding plans as we celebrated the New Year, I wish them every happiness for the future.

I love the idea of marriage vowels. Presumably it meant voles :)

What a sharp eyed fox you are to see that my prouesse as an Editor is not what it should be, lol! I have altered it now, and there isn't a vole in sight either I hope! Although a vole would probably make less typos than me!!

What a sweet, heart warming story. I wish nothing but happiness for these two wonderful people!

Brie and Seany, best wishes to the nicest couple in SL and RL :-))

WOW! What a beautiful story :) I'm so glad you two are getting married in RL :D

My best wishes for you two!! XoX

Thanks, Janey for this touchy and well written story. Keep us knowing each other better, we are a very nice community:)

Thank you janey and everyone who left such wondeful coments. I cant belive its been 2 years its gone past so fast. Feels like yesterday .Me and seany are happier than we have ever been with such wonderful people in our lives that are more like family. Dont foget youll be getting your invites to to our 2nd anniversary bash and re newal of our vowels...i do accept gifts of cake and chochlate winks.....Brie

to brie seanie.
home is where the heart is

thanks for a great story janey you made it sound just how it really is :) we are very much in love and we love all are friends that we have on here.
You have all been apart of the last 2 years and made it all that much better :)

KABABS ALL ROUND I SAY HEHE

Hi Brie and Seany, It was lovely for me to be able to write about your wonderful news, I really enjoyed writing your story! I wish you every happiness for your future life together and thank everyone else for their comments too!! (Thanks Seany, I'll have a veggi kebab to celebrate!)