The Problems With Chatting and Never Get Timed Out Again! 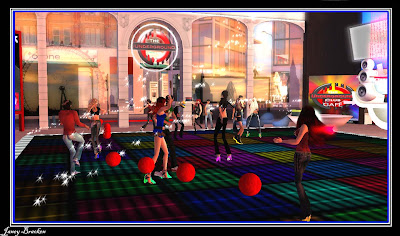 If you are somewhere like the Underground or Mayhem clubs or the Coach and Horses in virtual London it’s good fun to join in the chat when you like, dance and relax, well that’s the idea anyway, I am finding life a little more difficult lately as I seem to get complete strangers IM me out of the blue, maybe they have read some of my stuff on the internet, who knows, or maybe they just want a chat, but dealing with three or four IM’s at a time isn’t one of my finest talents. Not wanting to be rude to people, I try to answer them, whilst hoping I don’t get the chat windows mixed up and answer the wrong person with the wrong response, but alas it does happen sometimes, and even worse it may come out in ordinary chat making me sound like a nutcase!! I’ve even said goodbye to people in the club because I only glanced at the local chat and thought they were leaving, when in fact, they were saying goodbye to someone who really was leaving! I believe we have all done that at some stage though; I can’t be alone in mixing chat windows up! That’s how it was last night, I couldn’t even listen to the music properly in the UGC, whilst talking to three of my friends and two new people who I had never laid eyes on before. I would imagine the London team and business people in SL suffer this IM stress all the time and some must cope better than others. I know I have suggested this before, but I think it is high time that the Lindens, bless ‘em, devised a method that allows one chat IM channel at a time to be open with a message to other people trying to get through that says ‘sorry IM engaged, please try later’. I know you can say to the people “sorry I can’t chat now” as I had to one of my friends last night, but it always seems bad manners and like a snub, but it truly isn’t. So limiting IMs to one at a time would solve that problem. Conferencing isn't always very good either as chat lag seems to be rife whilst using that. Another problem is, with all the IM tabs open with people talking to you, you may miss an IM from someone because the tab is hidden and you have spent all evening not answering because you were unaware that they were there! So please excuse me if I don’t answer you if you send an IM, the system doesn’t really work very well for me!

A handy tip I picked up on my travels to a scripting centre the other day, is how you can leave your avatar dancing in the club whilst going off and eating your tea and yo 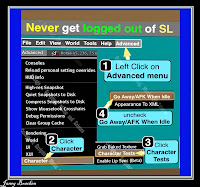 u won’t get logged out. You will need the Advanced Menu in your top bar, so if it’s not showing that’s Ctrl Alt together with D (Ctrl Option D for Mac users), then from Advanced click on Character then Character tests, and uncheck Go Away/AFK When Idle. You will find your avatar stays around. I would imagine this could open up a whole new world to ‘camping’ (earning Linden dollars by sitting or dancing somewhere), as people won’t have to keep coming back and giving their ‘mouse’ a hefty rattle to wake up their av before getting logged off by being timed out. 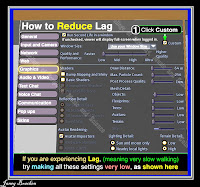 e tips for reducing lag too, under Edit, Preferences, then Graphics you can click the custom box in the right hand corner and reset your options to low in the various settings as well as setting the graphics slider to it’s lowest point too. I tend to raise it to High or Ultra when I am taking photos but then reducing it again to get around SL. I still crash though, but I think that is me junking up my computer, just like my inventory, it’s out of control! I sometimes have loads of windows open on my desktop as well and that’s just asking for trouble!

I’m off now to create a floating text sign that says ‘Sorry if I’m not answering you in IM, I’m just having a nervous breakdown’

Excellent suggestion - It can be very embarassing to answer in the wrong window - I know from experience!

It's also difficult to carry on a conversation with someone if they are being bombarded with IM's. They don't want to be rude of course, but the inevitable lag in responses makes a conversation seem almost to be an afterthought to the person waiting for a response.

I hope the Linden's listen to you, as once agian you have a brilliant idea! (Is there no end to this woman's talent????)

Thanks Drax, I really hate the thought that anyone would think my conversation with them is an afterthought because of response times, what with IMs and SL freezing sometimes as well, it's getting very tricky! I suppose I should now work on the theory that if a few people are chatting to someone and they each feel like they are getting late answers and all are all a bit put out, it's best to just say "sorry, already chatting" and get back to them later.

We have already talked about this Janey but for anyone else interested. The Emerald Viewer offers a facility to sent a prewritten IM text reply to any one who is not on your friends list, they will receive it as soon as they start to type. You don't have to use it all the time, just when you need a break. Maybe it will be included in the standard Linden viewer soon.