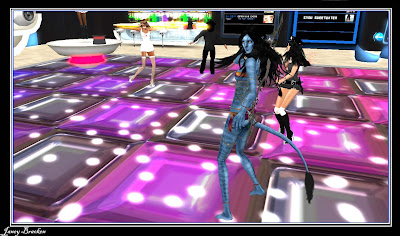 I went out on my rounds last night, keeping the streets safe in my policewoman uniform, complete with truncheon and handcuffs. As I proceeded down through K 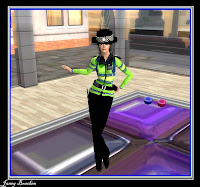 nightsbridge, I came across a rowdy crowd misbehaving in the Underground club, a den of iniquity if ever there was one! I proceeded with caution through the door of the club and a shocking sight met my eyes, there for all to see was an assortment of suspicious looking people, all in their work clothes. They must have skived off of work because of a bit of snow on the highways! Talking about snow, there was another police officer who was actually dancing instead of doing her duty, Snow Sweetwater was having a good time and had the nerve to look a lot better in her uniform than I did, that alone is an offence and I suspect it would incur a hefty fine of around 200 Lindens! I decided to just cauti 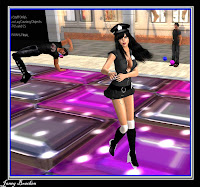 on her on this occasion! Hostess Amourette Dubrovna still had her maids uniform on and was trying to control the crowd with a feather duster, it may work with cobwebs but not this drunken lot! Redstar Iwish was aiding and abetting Amourette by playing some outrageously good music that the boisterous rabble enjoyed so much they refused to go back to work! TXBarbara told everyone to "Shake It", I think they must have been trying to drop their stash hoping I wouldn’t see it. Then through the door came a career criminal in his striped prison outfit, Ed Follet, he was as bold as brass as he walked in. He was so good at being a cat burglar that he escaped before I c 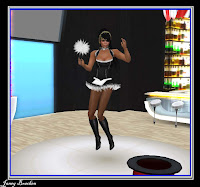 ould take his picture!! I had to rub my eyes as I spotted Eliza Sandalwood in the middle of the dance floor, she was a huntress and straight out of the film Avatar, no doubt she too should have been out hunting instead of having a good time in the UGC.

Reluctantly I got called away for a meeting with my Chief Constable. However, after the meeting I was called back to the club because someone had reported a punch up going on between Brie Janick and Al1 Dalglish. Luckily I arrived just in time to keep the peace and separ 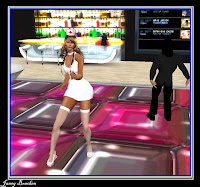 ate them! Seany1235 Blinker, who had taken over from Redstar to dj, sighed with relief as Brie and Al1 shook hands and made up! Another successful night on the beat in old virtual London Town! 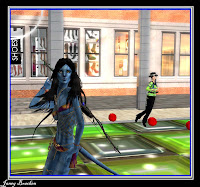 Oh, so sorry I missed that event! It sounds like everyone had a fantastic time. Great article Janey!

Yes janey lucky you came when you did or i would have given a Al a godd beating that night rofl...I promise officer to keep the peace but still think that Al guy is dodgy and the police def need to keep an eye on him

Hi Hib and Am,

It was a shame you missed it Hib, we could have gone as Cagney and Lacey!! beggsy me the one with the gun!! It was a fun night Am, you did a great job keeping the rabble in control!!

I realised what a trouble maker that Al was as soon as I set eyes on him, but I think it's my duty to caution you both with attempted affray!!! Any more punch ups and I will have to get the judge to sentence you to organising a lot more fancy dress parties!!

Yes, Janey, I think as a warning there should be some sort of sentence for the UGC to put on more fancy dress parties as community service. And Cagney and Lacey sounds like an excellent idea.

You and snow were arresting sights Janey, and Am definately tickled Ed's fancy. The 'bird' had flown because it was 'time' for ed to nip home and 'stir' his 'porridge' lol. :-))

Looked like you were well used to doing Porridge Ed, great outfit by the way!