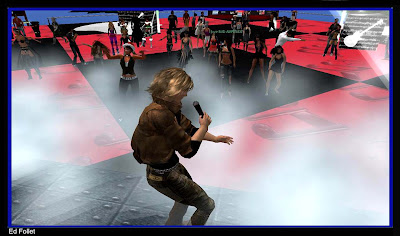 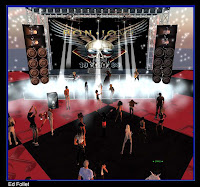 n Jovi tribute in the SL Knightsbridge sim. Ardent fans enjoyed a momentous show with all of the major hits ranging from the well known early anthems like ‘Livin’ on a Prayer’ through the ballads and country rock to the latest single ‘We Weren’t Born to Follow’.
The real life Bon Jovi who hail from Sayreville, New Jersey in the US have been a major force since the early 80’s and in that time have racked up sales of over 120 million albums worldwide and performed more than 2600 concerts in over 50 countries. Their latest album ‘The Circle’ was released only in November and the band will be touring again in 2010.
The band's longevi 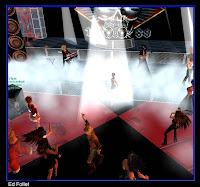 ty mean that they’ve been picking up fans for nearly 3 decades and are regarded (in the US at least) as being the originators of ‘Pop Metal’ with an image that turned heavy metal into a genre that could be loved by women. Status Quo fans in the UK might disagree.
Once again thanks are due to SL Knightsbridge Director Brie Janick for organising a stunning show which was greatly appreciated. The action now moves to the Mayfair sim for the next concert which will be a 'Beatles' tribute on 19th December starting at the earlier time of 8 pm UK (12 PM SLT).
Ed Follet
Posted by Janey Bracken at 07:38