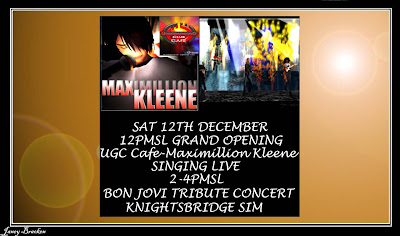 We have lots going on in virtual Knightsbridge this Saturday! Not only have we got the opening of the new cafe next to the Underground Club, but there is also a Bon Jovi tribute concert. So make sure you are logged in for a full night's entertainment! The evening starts off in the cafe with fantastic singer Maximillion Kleene, one of SL's biggest stars! (Main picture by courtesy of Brie Janick)
There was another wonderful singer in virtual Mayfair on Tuesday night, 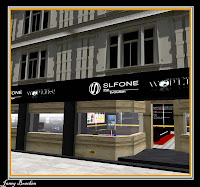 Katia Keres, and what a brilliant voice the lady has! SL was against me that night though, as Katia was so popular that the sim was packed out and I couldn't move from my spot near the stage or take any pictures as people all around me, including Katia were grey and unrezzed, but I could hear her amazing vocals and she stunned everyone there. Katia had been invited along to sing for the opening of a new shop, SLFONE in Mayfair. Hopefully Katia will come back to virtual London for another performance at some stage, and I will be able to get some pictures of her.
Janey Bracken
Posted by Janey Bracken at 08:31