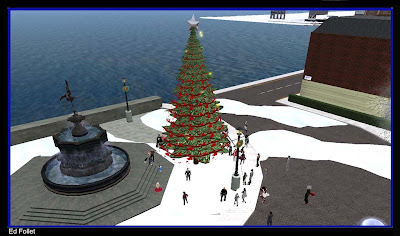 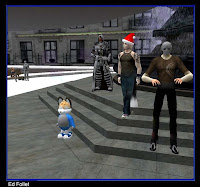 L London as a friendly gift from the residents of SL (Second) Norway. It is the second year that the ceremony has been held in Piccadilly Circus in SL Mayfair but mirrors a real life tradition of ‘lighting the tree’ that has happened every year in London‘s Trafalgar Square since 1947.
A plaque at the base of the RL tree has the words - This tree is given by the city of Oslo as a token of Norwegian gratitude to the people of London for their assistance during the years 1940-45.
This was the period 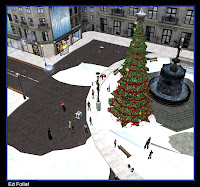 of the Nazi occupation during WW2 when King Haakon VII escaped to Britain and a Norwegian exile government was set up in London. To most Norwegians during those dark years, London, through its BBC radio broacasts, represented the spirit of freedom and a hope for liberation.
The tree - probably the most famous Christmas tree in the world - has become a symbol of the warm and close friendship between the peoples of Britain and Norway. For Londoners, the lighting ceremony signals the start of the final countdown to Christmas.
Back in SL there was a good turn out of both SL London and Second No 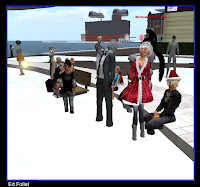 rway residents. As the tree was rezed amid cheering and applause, SL London Director Torric Rodas accepted the gift with the words ‘We thank the kind people of Norway for presenting this magnificent tree to London as a memento of our friendship’ then continuing ‘We wish everyone a very Merry Christmas and a prosperous New Year. Thank you for visiting London’
Ed Follet
Posted by Janey Bracken at 00:32