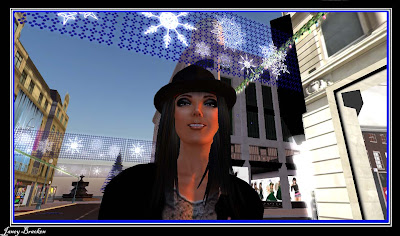 It was the end of a long SL tradition a few days ago, the mentors who helped so many people are no more, the Lindens announced that the position was to finish, and good 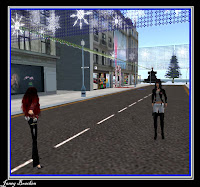 or bad, the mentors would have to adapt to becoming just ordinary avatars and people who seek help, especially newbies, would have to rely on meeting kind people to give them some advice. That’s why the residents of Virtual London are so lucky, especially the new people who arrive, not knowing what to do or where to go, Director Brie Janick has a group of well trained and highly efficient Greeters to make sure people get as much assistance as possible.

I bumped into one of the most popular people in Virtual London, who just happens to be, not only a Greeter, but an Underground Club host as well, Nahiram Vaniva. I asked Nahiram if she liked being a Greeter, she told me “I love it! helping new users, seeing them change, then seeing them after a while all settled.” Nahiram told me that she keeps in touch with a few of them and some of them are doing really well, even owning their houses, some have even got married in SL. Nahiram told me “It’s like having children, lol” One of the people that Nahiram had helped had even come back to Hyde Park to introduce her 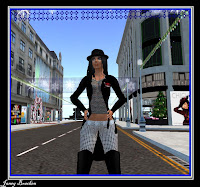 fiancée and invite Nahiram to the wedding. Nahiram helped the lady before she had officially been a Greeter, so she had always loved giving advice to whoever needed it.

With her Greeter job, Nahiram also has some powers, and she is able to eject people if they are breaking the rules, or generally being a nuisance. So beware, Nahiram is not afraid to boot you out if you cause trouble!! She will warn three times, complete an Abuse Report, and then eject. The London Directors would only give this power to trained and trusted team members and you can rely on Nahiram to use the power wisely.

There is a little sadness involved though, some people that Nahiram had helped, that she has on her friends list, have just disappeared. She tells me that she does not want to remove them from the list, but does wonder why they never returned to SL.

Nahiram, who comes from Venezuela, is very clever and in real life she 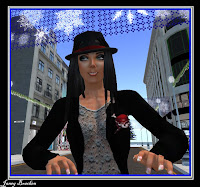 was trained to teach languages, Spanish and English, she is also qualified to teach Language Teachers. Nahiram enjoys her job as a host in the club as well, and part of that job is also helping people and making them welcome. Nahiram certainly fits the bill and she is a credit to Virtual London!

Lots of the mentors will be missed in SL, many of them did excellent work, but with people like Nahiram around, newbies and older avatars alike will never be without someone caring to help them.

Sighs ..I wish I was a neewbie again! I know that the London management are already highly appreciative of Nahi's efforts and she's a great hostess too. Thankyou Janey for bringing us this insight of one of SL London's loveliest residents:-))

Ooohh Janey!! Thanks so much for your very kind words!! I feel well portrayed here... Gosh!

I'm really pleased that people are glad with what I do. I just want new SL users feel at ease when they get to SL Hyde Park gateway.

Thanks a lot :D

Thanks for your words

Awww Nahi is one of the most genuinely lovely people that I have met whilst being a greeter myself. This is a lovely article about her Janey :)

What a lovely article on a great person. Nahiram, you are so warm and welcoming, it is always a pleasure to see you in Virtual London and now on Virtually London (lite)!

oohh Isabella..!! thank you for those words, double-colleague:D

Hibs!!! It's also good to see you in SL and here:)
Thanks for those warm words :D

"the mentors would have to adapt to becoming just ordinary avatars"

The Mentors were always ordinary avatars and I'm sure any Mentor worthy of that title would agree.

If I can quote Rails Bailey:

The Mentor tag is nothing more than a way to identify who Mentors are, it does not make us super-human.

There is not one Mentor who is better than any SecondLife Resident."

I would have to disagree a little bit about Mentors, because I have been in SL so long I have met some fantastic ones, some are really so caring and just enjoy helping people where they could. One such Mentor I met was Kimber Epoch, she loves assisting new people, and even gives tuition lessons in SL, and Kimber, with the help of her mentor group, collected vast amounts of money for charities. Kimber is special she has had cancer in real life, but never thinks about herself when it comes to looking after people. Ok you can say that anyone can do that without the Mentor title, which I now suspect they do, but I have been privileged to meet people like Kimber and a good many mentors who were the stars of SL.