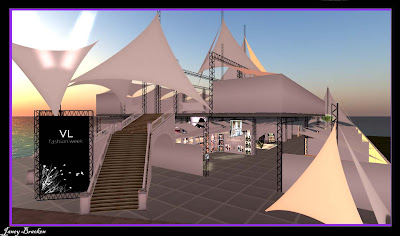 Here is news of Virtual London Fashion Week 2009, and so far it looks like it's going to be a major event not to be missed:
Press Release: 5th September 2009 by Event Manager Ruskin Thor

The 19th - 25th September 2009 will see fashion retailers, designers and residents from across Second Life gather for a festival showcasing the best in Second Life’s virtual fashion and couture, talking place in the Kensington Sim in Virtual London.

The event this year will have a number of major features. The largest is an Exhibition Area in Virtual Kensington: 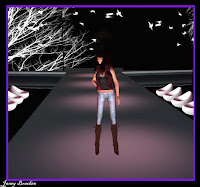 me-grown talent from Virtual London, and major names from around the Second Life Grid. It’s a beautifully designed exhibition space and will be a pleasure to visit.

A large number of well known designers such as Angel Dessous, Ali Couture, Lixena Marcus, Divaliscious, Suki's Silks and LC Fashions to name just a few from many have already been booked, and even with some time to go before the start of the festival, the Expo area is filling up fast. As well as showing off their newest and most exciting lines, many of the designers featured are offering special free designs and discounts on their regular prices, exclusive to Virtual London Fashion Week. The Expo area will officially open on the 19th of September, to coincide with the start of Fashion Week.

To book one of the remaining spaces at the exhibition area, Second Life designers should contact Ruskin Thor by note-card for full details - but hurry, as the last spaces are going fast.

One of the most exciting events taking place at Virtual London Fashion Week will be the nightly runway shows and parties, planned to take place every evening in the sumptuous surrounds of the Kensington Club, just across the road from the Expo Site.

A beautiful catwalk runway and environment has been created with luxurious chairs for the glamorous guests attending the event. Each night of the week a number of shows will take place, with some of Second Life’s most interesting and innovative fashion designers show casing their best new work.

This year’s event will a 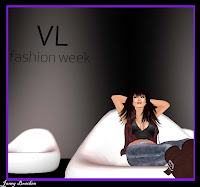 lso show off not just a magnificent collection of contemporary evening and daytime wear, but also will include themed evenings featuring Second Life’s special fashion niches, such as avatar “body” fashion items - hairstyles and skins; and also, role play, historic and specialised clothing for fantasy games in second life. Tickets for the shows will be available shortly from sales boxes in Virtual London and at the exhibition site in Kensington.

Each evening from the 19th to the 25th September from 1pm SLT (9pmGMT) will feature a number of designer shows, followed by a party or feature by a performance artist.

To book one a space in the nightly shows, Second Life designers should contact Ruskin Thor by note-card for full details of the event.

In order to open up the exclusive and glamorous nightly shows to a wider audience, this year live video the Kensington events will be streamed to a number of giant video screens placed around Virtual London. This will enable a larger number of people to participate in and view the shows.

Janey, you wrote "Each evening from the 19th to the 25th September from 1pm SLT (9pmGMT)"

Should that be 9pm BST?

Well Hi Rob, thanks for your comment. Actually this is Ruskin's Press Release, and very nicely written by him. But I use GMT too because everyone knows what it is and all BST is, is GMT with an hour added (Summer Time Order 2002). It could also be called GDT (Greenwich Daylight Savings Time), but like I said to Ed in a previous comment, everyone knows GMT. However, if this is causing great debate, I will say UK time instead, putting my tin hat on and definately hiding when the clocks go back!! hehe!

Happily, Janey, the clocks won't go back until October so well after the event in question.

Also SLT is the same as Pacific Daylight Time (PDT, in summer and Pacific Standard Time (PST) in winter.

So during the 'daylight saving period' SLT = GMT - 7 hours but during the rest of the year,
SLT = GMT - 8 Hours. It makes it much easier if, like Linden Labs, we observe local time.

Of course if we are talking timezones, I should really say UTC rather than GMT :)

My remaining braincell just died, hehe, but thanks for your information, I'm beginning to think I have too much time on my hands (oops sorry about the pun!!)