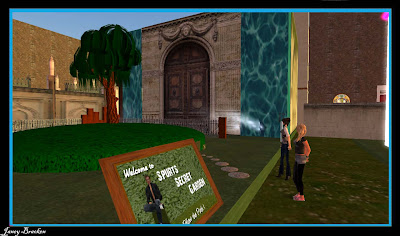 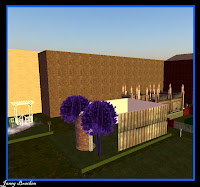 L Chelsea, some people have done quite a bit so far and others are just starting. From what I have seen it’s going to be a job to judge as the ones that have already taken shape all have some great features and ideas. Seems we have quite a few really good builders in Virtual London and it’s exciting to see how well they are doing! I met Elizabetta Westland and we stood having a look.
Talking of great builds i 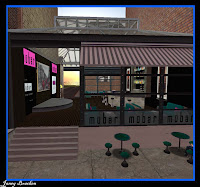 n Virtual London, there is one bar in Soho that I really like, it’s called the Mobar and it’s a good size with plenty of seating and it’s nicely located too. I’ve haven’t seen it being used much so far, but that may be due to my time zone, however, it would be a lovely meeting place for people to sit and chat. The only thing that bugs me, and it bugs me all over the grid, is some of the seating, getting the pose balls facing the right way and the right height on the seats. I tried the chairs outside the Mobar and they are all facing the wall instead of across the table, likewise with some seating in another p 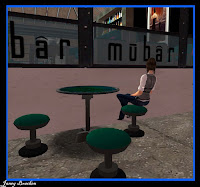 art of Virtual London that Hibiscus and I tried (which had us laughing so much!), it turned us upside down with our bottoms in the air! not a pretty sight!!! (although I think Hib was hiding under the chair because I wanted to take her up in the helicopter!). Virtual London isn’t alone in it’s little bits of seating failures (of which there aren’t many), the location for the CNN meetings I go to, on CNN Island, is notorious for the bad seating in the briefing area, it’s quite funny to see new people arrive who end up sitting back to front and and can’t figure out how to sit facing the right way 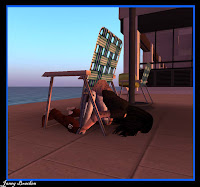 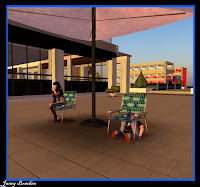 I recognise that face (the last photo) lol. OK, I admit it was me at the CNN meeting. I sometimes wonder if these things aren’t deliberately done to embarrass newbies. Hibs gave me a good tip, carefully click on the front edge of the seat from the direction you want to face when sitting. Pose balls, which are scripted objects, are a little trickier. I once had a plane that would only fly sideways for similar reasons. The builder will know how to put that right.

That plane might suit me, everything I seem to drive goes sideways anyway, hehe. It was nice of Hib to look after you by telling you about the seats at CNN (pity though as I had my camera ready, lol) When I'm putting poseballs on something I've made, I usually click to sit on them, then click myself which gives me the option of Edit so I can actually shift my av, plus the poseball to the right position. It's not always possible with bought stuff though, as some you can't modify, as probably in the case with your plane.

Not the only Dodgy thing in london