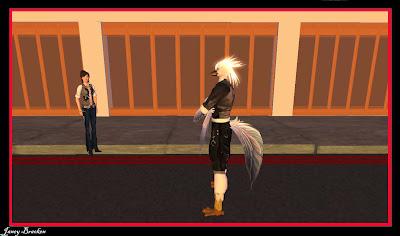 Wandering through the Soho sim, I spotted a familiar name on my radar, R 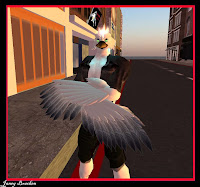 everend Quar. I had seen Reverend a while back in the Hyde Park sim, where he had been helping the newbies as they arrived. As I turned to look in his direction I could see that he was sitting on the kerb and his legs had sunk into the ground to his knees, he told me “I keep falling through the street” he continued “I fear if I stand up, it will happen again”. But stand up he did, and he was fine. I remarked what an unusual avatar he had and he told me he was a phoenix.

Reverend Quar told me that he is going to dj at the Phoenix club in Soho, quite fitting to 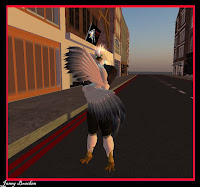 o with his great appearance! Reverend, who also dj’s in Rob’s Rock Island several nights a week, plays mostly Rock and Blues, which should suit the Phoenix club quite nicely.

He told me he lives in Arador, which is a dragon sanctuary, and he serves as ambassador there in a gryphon form.
It was nice bumping into Reverend and I promised I would take a look at Arador as well. I have visited the Isle of Wyrms where the dragons live, and was made very welcome, so Arador should be interesting too. The Reverend was tired, so I let him go on his way, he had been up all night dj’ing. So if you see him about say ‘hi’ and also catch him in the Pheonix club strutting his stuff!!
Janey Bracken
Posted by Janey Bracken at 00:24