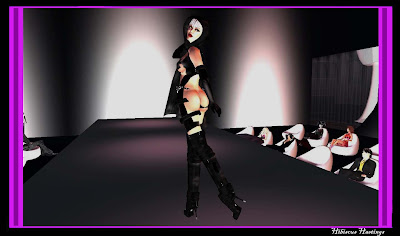 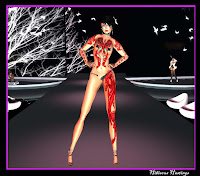 with the designs of Ezura Xue of Ezura. Ezura creates vintage, steampunk, goth and fantasy clothing that is sleek, sexy and more than a little bit dangerous. After the introduction by shaza Denver the audience knew it was time to STRAP themselves in for a ride beyond your inhibitions.

Things got off to a fiery start when model Naiya Kazyanenko appeared wearing the “Feilung Dragon” full body tattoo in red. Dragons wound themselves sinuously up and down Naiya’s body, emphasizing her shape. 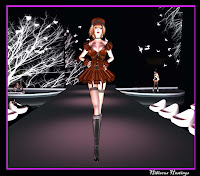 Delacroix Constantine followed in a display of black fabric and chains, complemented with a hood and tall boots. The outfit was called “Apocalyptic”, which can mean “affording a revelation” and was certainly the case here.

Naiya returned to the stage in a black leather 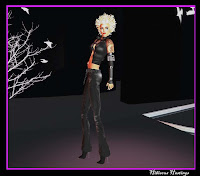 outfit of vest, pants and gloves. Maribel came next in a teal coloured brocade outfit that was accessorized with steampunk goggles. Delacroix appeared in a sexy black lace up vest, short and flippy black skirt and thigh high boots.

Then a “Wicked Lolita” appeared before the audience. This was probably the most striking outfit shown. Worn by Naiya, it consisted of a black skirt accented with red, a black waist cincher, red bustier and black top hat. The skirt had what appeared to be knife-like extensio 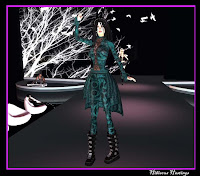 ns poking out from under the hem, and Naiya herself had a chalky white face with bright red lips. 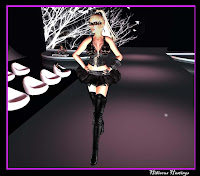 Delacroix ended the night wearing a steampunk outfit which included a brown bustier, short skirt exposing garters and hose, all in brown, and a tightly fitting white jacket over all. She chose to accessorize with a black choker and black lace half-mask. Mysterious and inviting at the same time.

Ezura Xue’s clothing is detailed and versatile, appropriate for all moods from murmuringly seductive to explicitly sensual. 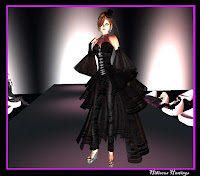 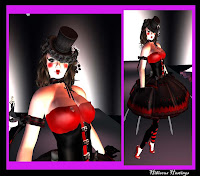 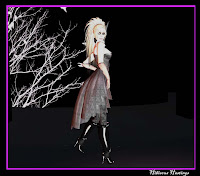 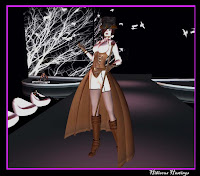 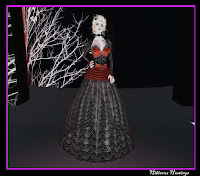 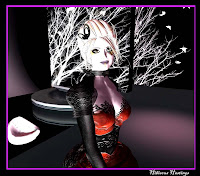