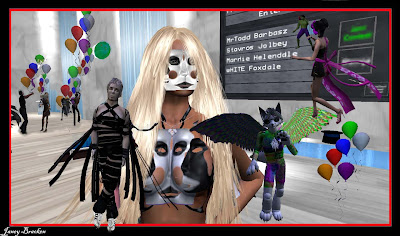 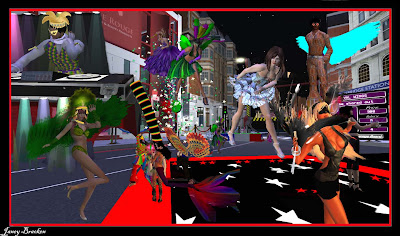 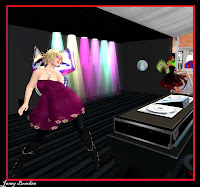 ime, dressing up in their most imaginative outfits, in all the colours of the rainbow!!

I had a surprise though, I had heard that SL Knightsbridge and SL Mayfair may be coming together to celebrate the day, and as I made my way over to the street party that I knew about in Knightsbridge, I saw a notice sent out by the Mayhem club to say they had a Carnival evening too, and like the Underground Club they were offering prizes for the best costumes etc. I thought this was a pity, as it could have been a ‘get together’ of the people from both sims (or all the si 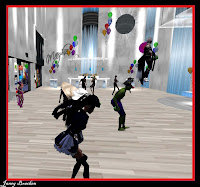 ms in fact) to have one big party. I know there are people who have never crossed over from their favourite sim into the other sims to meet the other SL residents! Honest SL London people, you are all great, and you would really enjoy meeting each other!! There was a funfair set up in SL Kensington to keep the party going, and I wonder how many people ventured there from the other sims, if you did, drop a comment on the blog and tell me what you thought of it all.

I wanted to see what was going on at each pa 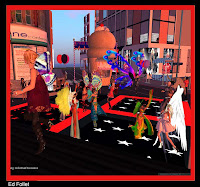 rty so I stayed for a while at both and they were really good events, and well done all the people with those wonderful costumes! The Mayhem with it’s new cool interior looked a treat, as did the street outside the Underground Club, the managers had done brilliantly with the decorations. Perhaps if they had the parties on different nights we could have all enjoyed both places, which would have been really nice. Come on! let’s all support each other and get together!
By the way, the person who stole the show for me was in the Mayhem club with the most enormous hair I have e 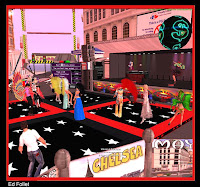 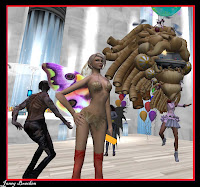 Thanks Janey for covering this event. So much fun was had by everyone and it was an amazing day... Was nice to see everyone make the effort with amazing colours on display. I had a blast and hopefully many more events to come
Brie Janick

I was given the impression that something had been planned to happen across every sim as well. Imagine my suprise when I logged in to find a London Group Notice that Knightsbridge was having a fun fair...no mention of any other sim at all!

It's such a shame because this could have been an excellent opprotunity to showcase all of SL London to both new and not so new players. Oh well, live and learn I suppose.

I was glad to see that two of the sims were celebrating carnival night, even if it wasn't as it was rumored to be.

I think you may be being a little unfair about people getting their facts wrong, ok the funfair was in Kensington, but Brie, the Knightsbridge manager did announce it in notices, it was planned between her and Seany to tie in with the Knightsbridge Street Party and a nice idea!

Actually there was a funfair ride in Knightsbridge, check the photos and you can see it.

Great Article, great event, great costumes - thanks to everyone who supported this. I was at the RL event streaming into SL at the time... did anyone spot me on video?

Hi Debs, I bet you had fun at the real event, bet it wasn't as good as the SL ones though, lol!!