Nicci Lane At The Knighsbridge Gallery 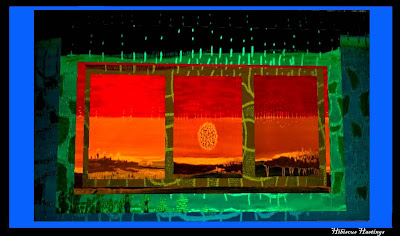 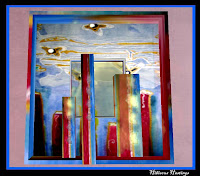 exhibitions. On display now is the work of Nicci Lane, an Australian artist who has been working in SL since 2007. She came to Second Life on the recommendation of a friend who knew about Lane’s love of technology. Lane brought in her RL art, learned to manipulate prims and expand the RL images. She says that she “draw(s) from nature, the human condition.. (is).. eco conscious, and in rl paint(s) abstract(s) with enviro themes (using) mostly acrylic, oil, silk and ink.”
The colour palette 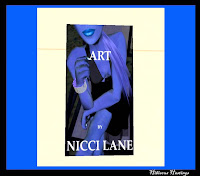 Lane works with is intense and vibrant. As well, many of the works seen in the Knightsbridge Gallery are kinetic - shifting, flowing, zooming in and out, rotating. One work, “Residue ...going going gone...” looks to me like a post apocalyptic landscape, the “sky” done in shades of dark red, hot orange and a rich maize-y yellow. An object in the middle of the work could be a sun or a sphere covered with people. Another work, “Biodegradable”, predominantly blue and green, is reminiscent to me anyway, of a satellite view of the earth. Delicate branches can be glimpsed covering the foreground. “After the Rain” has three rectangular blocks in the front of the picture plane . Fluffy white clouds float by in the background, which changes from a lovely blue sky to one which seems to have oil droplets over it. And “Out of Nowhere” shows a bright pink flower that has apparently popped up out of things that resemble tightly wound wires or copper piping. 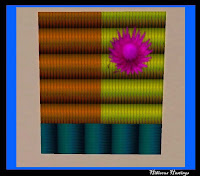 e beautiful colours of the environment, (and) .. strive(s) to evoke dreams, memories and a sense of peace.” I asked her about this, as to me anyway, some of the pictures, particularly “Residue ...going going gone...” looked more like a nightmare than a dream. She said that she was making an environmental statement, as she was with “Out of Nowhere”, the picture with the pink flower popping up out of nowhere. The background represents “sun earth sky, how a flower forms”. She continued “everything has its place, but nature just invents anywhere any way it can, dependent on light, in space of the earth 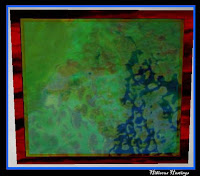 ”. Nicci Lane must be an optimist.


Lane has exhibited all over Second Life, at such well known galleries as Twilights Peace, Cetus Gallery District and Angelgate, and won the Poetry in Pixels (best painting) award in 2007. At the moment she has more than 80 artworks on display across the grid, at the Kennesaw State University, Georgia sim, Untold Ark and her own gallery, the Lane Studio for Fine Art, in addition to her exhibition here in SL London.