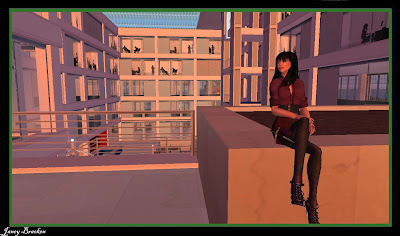 Hibiscus Hastings wrote a few weeks ago about things not being permanent in SL, but I really can’t keep up with SL London sometimes. I had reported on the DMGT buildi 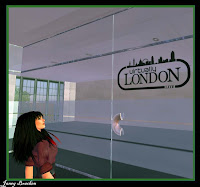 ng, Northcliffe House, being converted into apartments only a few weeks back and I did think at the time that they were a touch expensive for 700 lindens a week, although they were very spacious. I popped back over there to have another look on Saturday and the one apartment that had been completed had gone, and it looked like some of the office interiors had been put back, although I did spot the box that the building comes in, in the basement, so perhaps they have just re-rezzed it again for one reason or another. I have heard since that the interiors of the offices are going to be ripped out again, what a shame! It’s still holds great memories for Me, Hibiscus and Pixi.

I had been told that t 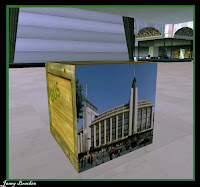 here was to be a restaurant in there too, called The Ivy Café, but there is no sign of anything going on in respect of that. Kensington needs a meeting place that everyone feels at home in. I love the sim, it has some great things going on like the copy of the Nat West building being put up next door to Northcliffe House, and it looks like a good example of the real building. I would like to see some events taking place there that would gather all of SL London together, not just the Mayfair people or just the Knightsbridge people, but all of them together. We used to have some brilliant live musicians playing at the grand Kensington building, so maybe we need to think about opening the sim up again for such events. The way people aren’t mixing is almost becoming like the south of the river Thames and north of the river in real life, where there is some gang riv 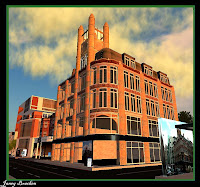 alry going on! Although of course in SL London we are all on the same side of the river!

I got a shock when I returned to my new office in Kensington on Sunday though, it was bare and all of my furniture had gone. I had a message saying that stuff had been returned to my inventory. When I checked there were only eight items returned, so I lost quite a bit of the pieces I had bought and had made. I rezzed the items that had been returned back into the office and set about making some bits that were missing, but some of the other bought stuff is annoying, as I had searched around for low prim furniture and have no idea w 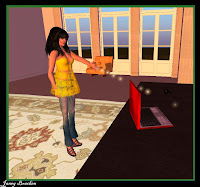 here I got it from. Who knows, maybe in a day or two the stuff may turn up, I believe someone said this was possible.

To make matters worse as I rezzed the few bits I had, a griefer turn up at the door, his name was Edward Quinzet (yes I am naming and shaming you Edward! I have a copy of the transcript of when you spoke to me and what you said! Edward even turned up at the UGC tonight and denied he had said anything till I showed him the record.). He came right up to me in the office making lewd comments, which I can’t repeat here. In no mood for griefers, I told him that he was talking to the wrong person and that I don’t shock easily, so his lewd comments were lost on me! He then c 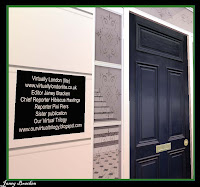 ontinued to bump into me to annoy me. He was like a little bluebottle rushing around and needed a good swat with a rolled up newspaper. I did consider doing an abuse report on him, but couldn’t be bothered, as I was getting my office sorted, I’m sure he will get plenty of AR's on his travels. I have decided to take mug shots of griefers, even if they are alts, and name and shame them from now on! So if you see ‘mug of the week’ you will know what it’s all about!

Well since writing the above about Kensington, I have just had the good news that Seany1235 Blinker is the new Manager, way to go Seany!!! Now I know that Kensington will have the best person possible in charge!
Janey Bracken
Posted by Janey Bracken at 00:03

Way to go, Seany! :) I know Kensington will flourish under your management!

hehe thanks liz and hotsy me and TD have got great plans for kensington so watch this space :)

Of course 700 Lindens a week is expensive, especially when you Janey dont pay rent.

I work very hard for nothing to promote SL London, bringing what news I can, sometimes positive sometimes a little negative if things need to be discussed. Some people in SL London appear to receive favours for no work or very little work. Debs kindly let me have the apartment as a base. You seem very unhappy about this, but wish to remain anonymous to other people (but I know who you are), very cowardly of you!!

To Anon how would you know janey dont pay rent ? i guess you must be a staff memeber but hiding tsk tsk