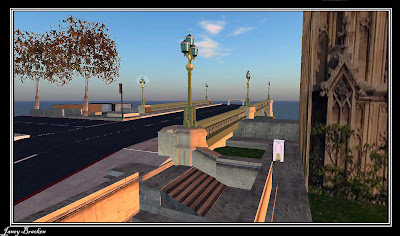 London Bridge is falling down, so the rhyme says, well lets hope Westminste 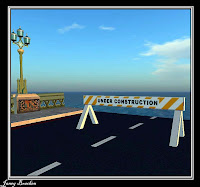 r Bridge is a bit tougher, as work has now been started on the virtual version, next to SL Big Ben. So far it looks really good, the detail is fantastic even down to the coats of arms embedded into the concrete plinths. There is a sign saying ‘Under Construction’ and I’m not too sure where all this is leading, because the piece of bridge already in place stops at the edge of the sim, so I wonder if there is another sim going to be added as time goes on.

The real Westminster Bridge joins the London Borough of Lambeth to the City of Westminster and the idea of a bridge met much opposition back in 1722 by the City, because of the loss of custom to the watermen and to the City markets, as they felt navigation would be impeded. However, Westminste 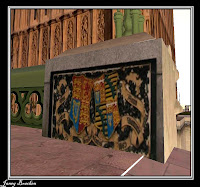 r had a fast growing population and it became tiresome crossing the river by boat and it was a long detour to London Bridge to get across. So in 1735 the bill was passed for the bridge to get the 'go ahead', and it became law the following year.

The bridge was designed by Charles Labelye, a naturalised Swiss engineer and architect. Andrews Jelfe and Samuel Tufnell were employed as master masons and James King as master carpenter. Originally planned to be a wooden bridge with stone piers, it was decided instead that Westminster Bridge should be built all in Portland stone. It was finally opened on 18 November 1750.

By 1810 Westminster Bridge started to show signs of decay and consideration was given to a replacement bridge. The new bridge was designed by Thomas Page in consultation with Sir Charles Barry and work started in 1854. It was finally finished and opened on 24 May 1862. The present bridge is of a Gothic design in keeping with the Houses of Parliament which stands alongside it. 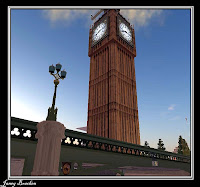 One of our American friends in SL told me that London Bridge was being built next to the virtual Big Ben and I didn’t really think anything of it at the time, but I suppose because it is central to Parliament Westminster Bridge might be thought of as London Bridge by our foreign visitors. London Bridge actually spans from the London Borough of Southwark over to the City of London, and it has a more sinister history than Westminster Bridge. The real London Bridge had always fascinated me in the fact that it had been built with houses and shops on, and that it was a very populated area like any other main thoroughfare.

Disaster struck London Bridge on July 10th 1212, when a fire started in the London Borough of Southwark and people ran across the bridge from the City side to try to quench the flames. The buildings caught fire on the City side of the bridge because of the strong winds and sparks, which trapped people in the middle. People jumped into the water to try to escape, but unfortunately, many of the vessels that were trying to save them sank. Around 3000 bodies were found, not including the ones who were burned in the fire.
There has been talk lately of building a bridge in real life London with the same idea of houses and shops, and with today’s building regulations to make it safe, it would probably be a great place to live. That would look pretty cool in SL London too!!!
Posted by Janey Bracken at 00:11