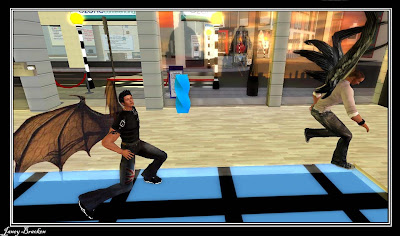 You see lots of people, especially newbies, with wings in SL. I suppose it 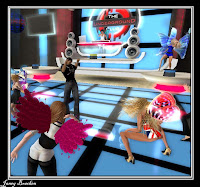 ’s quite amazing to be free of your physical real life state and fly around in the virtual world, so wings are something that you will find in your inventory when you are first born and quite a novelty to wear.

I went to the Underground Club on Friday night and they were having a 'best in wings' contest. As usual there were an assortment of pretty wings to be seen, although mostly on girl avatars. One man came into the club half way through the evening and hostess TXBarbara asked him if he would like some wings to join the contest. His name was Jim 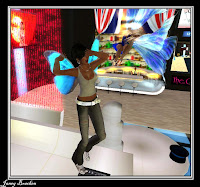 my and I think he thought wings were a little bit ‘not in keeping’ with his image, he replied to Barbara ‘not in the slightest, don’t do wings!’ Barbara asked ‘not even Macho wings, lol’ and Jimmy said ‘not any kind.’

I suppose I could see where Jimmy was coming from, wings do seem a bit odd if you want to keep your street cred, but like Barbara said there are’ Macho wings’ as well as all the fairy type ones the girls have, and to be honest SL is pure fantasy, you can dress anyway you wish from Victorian c 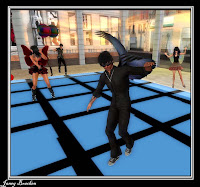 London Team member Auti Coba had a really masculine pair of bat wings on in the club and he won the contest with them, well done Auti. Builder extraordinaire TD Reinard sported a very butch pair of wings too, as did Seany1235 Blinker, and do you know, the guys looked great in them!! 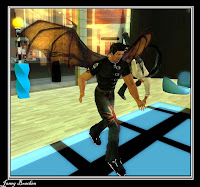 As for me, well I found a lovely gossamer pair of wings that a friend Nazna Wingtips had given me a long time ago, and I felt really nice in them. It’s a shame I never got the hang of flying very well though, I still crash into walls and miss what I’m aiming for, perhaps I ought to make the wings a permanent fixture!!!
Posted by Janey Bracken at 00:00