A Nice Home For Newbies! 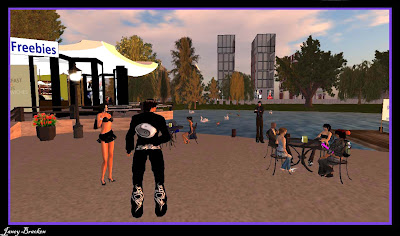 The location where we first set foot into Second Life can become special to many people, lots of whom return there because it is familiar and it is their first home. Mine w 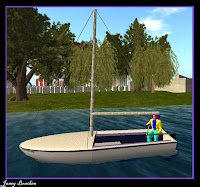 as a placed called Murray, and on my map I pressed the button for ‘home’ which took me back there, I met my fellow avatars who had also used it as their base and have stayed friends with many of them.

I see that Hyde Park, in its capacity as a Gateway for new people to enter, now has its regulars who meet just outside the rez area (the rez area being restricted to people under 30 days). As it happens this is a nice area for a ‘get together’, there is the Dell café, which sits right on the river and the tables and chairs outside are a nice place to relax and watch the virtual world go by. Of course, with the mixture of people arriving, there are power struggles, even newish people are trying to lay the law down about behaviour in the sim, and I witnessed one newbie being told off for using a word the other person thought was a swear word, it wasn’t really that bad, but the discussion got quite heated! Quite rightly the newbie didn’t appreciate bei 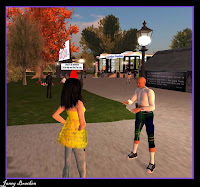 ng ordered around by someone picking him up on so mild a word that he had used, but I suppose it’s human nature that some people will try to enforce their authority on someone they consider less experienced then themselves.

It’s a strange thing to witness, avatars claiming an area, some smug regulars enjoying the naivety of the new people and trying to impress them with their knowledge and control of SL, whilst at the same time, not wanting to give too much away, leaving the newbies in awe of them. Luckily most people do genuinely want to help new people out and we have some fantastic London greeters and some other SL London inhabitants who do a great job. Most new people click the ‘Home’ button on their map and come back to their first rez place for a while, till they get settled somewhere else, some might even keep it set to their birth place, it’s where they will feel comfortable and enjoy meeting their friends.

I noticed besides the Dell café, there is a free boat ride to try, as well as some freebie items of clothing in the café, I saw a newbie taking a boat out for a paddle, it’s a 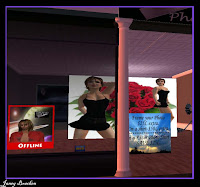 lot nicer than the harsh environment I started out in with an empty landscape and griefers running riot! (For those of you who haven’t tried changing your ‘Home’ destination on your map, go to the top menu, then ‘World’ then ‘Set Home to Here’).

For newbies who want to 'look the business' in their personal stuff, I spotted a great shop in Knightsbridge for people who want to get a nice profile picture done, it’s Razor Photos, owned by Razor Titanium, and he has a special offer for newbies, 25 Lindens will get you a terrific portrait. (He charges 50 Lindens to avs over 30 days old, but it’s still a bargain!)
Whilst I was in Hyde Park 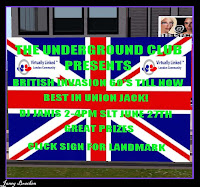 I spotted Underground Club Manager Seany1235 Blinker and he told me that they were having a ‘Best In Union Flag’ costume theme on Saturday night in the club, it’s between 2pm-4pm PDT, (that’s 10pm-Midnight GMT) dj'ing is our fantastic Janis Short. So get your outfit ready and come and have a good time at the UGC this Saturday!
Posted by Janey Bracken at 00:02

Thank you for sharing this with us eurominuteman, this is very interesting!!