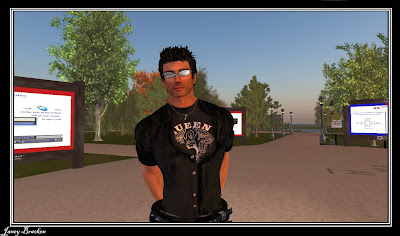 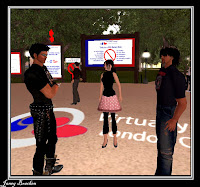 of recognition from Virtually London (lite). It’s our very own Clive Hissop, who has been made the Head Greeter in the London sims. I have been in the Underground Club when Clive has been enjoying the evening dancing away, but he never seems to be off duty. Newbies often walk into the centre of the dance floor, either partially clothed, or needing help and Clive takes them under his wing without hesitation, sorting them out with clothes and other things that are bothering them. 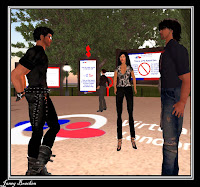 ame time, a girl was having great difficulty with her appearance, she had a black top and trousers and still had her dotty pink skirt on with her newbie skin and pony tail hairstyle. At the same time another new person that Clive had helped a short while before, was asking him for more help. I saw him calmly transform the girl as she stood there, while he was trying to find a belt for the new man to have, as he had admired the one that Clive was wearing. The girl was pleased to bits with her new glam look with long dark hair and a nice skin, plus he got her a smart outfit to wear too. He had a little trouble finding a belt for the man to wear, as his was not transferable, but none the less he said he would look for him later to see if he could find one, and knowing Clive he would not forget. 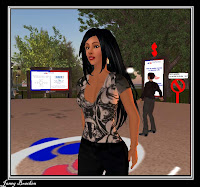 Clive also helps us all in other ways too, we get a fair share of griefers or people who just want to cause trouble in SL London, and time and time again Clive has come to our assistance to deal with them.
So Clive, your great work isn’t going unnoticed and Virtually London (lite) considers you to be a key member of the London Team and we want to thank you for all that you do for us!!
Posted by Janey Bracken at 00:02

I have Know clive a long time now and he is someone i consider not just a good friend but one of the hardest working people i know,He is an assest to the team and i would be lost with outhim. thank you janey for highligting his great work ,An big thanks to clive
Brie