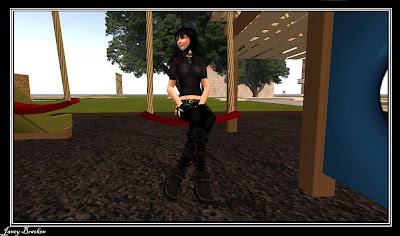 I went over to Kensington earler this week and noticed a children’s climbing frame there. It is a nicely made frame with swings, a slide and a rubber tyre to sit in. You c 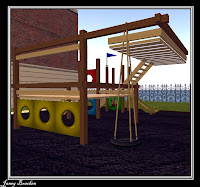 an climb to the top and sit imagining you are a kid again, actually it felt quite a nice place to relax and hide from the office for a bit!!

I can’t say I’ve seen any child avatars in the London sims, but I have met a few in other parts of the grid, and people have different opinions on the existence of children in SL at all. Of course they are not children in real life, or should not be, they are adults role-playing kids, so it’s easy to see why some people feel a little bit uncomfortable around them.

The ones I have met have been very nice though, and it’s easy to fall into the role of belie 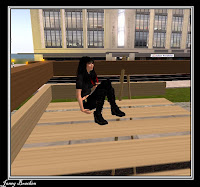 ving they are children and talking to them in character. One of my friends was a child avatar when I met her. She was an extremely naughty one though, she had a weapon: it was coke machine gun, it actually fired coke machine dispensers at people, which she thought was great fun, especially poor newbies, if they came within 30 metres of her, she would knock them off their feet with the weapon. When I first met her she would run around me in circles and then fly up in the air and stand on my head, whilst never saying a word. She refused to talk to anyone, but she was always about and being mischievous. We all accepted her and grew quite protective of the little av when strangers took offence at being blasted with the coke machine, how odd is that? But she was like a real child to her friends. She has since grown up in SL and is now a somewhat naughty teenage av, but she still makes us laugh.

It would be nice to see some child av’s in SL London, I have known ot 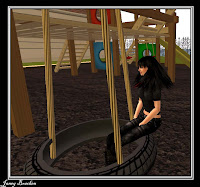 her people in-world who have not only got married, but also have SL children to complete their families. I did interview some child av’s for CNN some time ago and I found they liked being children because it was not as stressful as being an adult. Some actually wanted virtual parents, as they did not have a proper real life family. There are adoption agencies in SL where you can find a child, or a child can find suitable SL parents, it’s quite amazing when you think about it, but it must fill some sort of void in people’s lives that SL is able to fill. 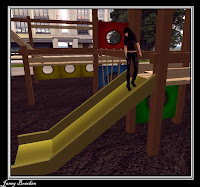 hild av’s SL lives, but I can’t say I have come across any child av’s who have mentioned anything about this, and being that they should all be adults, I would hope they would be sensible enough to report any improper behaviour that they encounter.
So if you see a child avatar or two playing on the swings in SL Kensington, say hi and remember to treat them like children, as that’s just what they want you to do.
Posted by Janey Bracken at 00:20