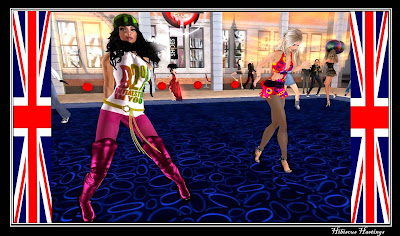 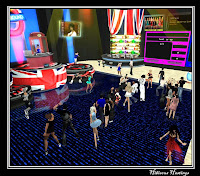 k. The first was the St. Patrick’s Day party on March 17. The club was packed, and it was a wonderful way for everyone to celebrate not only the holiday, but also to say goodbye to the old club, because not long after the newly decorated club was put in place.
The new club is open and cool looking, with blue a predominating colour on the center of the floor (which changes design periodically) and behind th 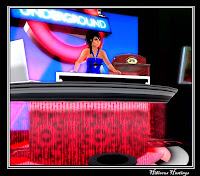 e dj’s booth. The ceiling seems much higher and the whole interior looks brighter, too, due to the huge glass windows on two sides, etched with London scenes. The Union Jack appears throughout, on the front of the dj’s booth and over the bar, and there is even a London phone booth tucked away at the back of the host area, leaving no doubt that this is a London club.
The re-launch party was kicked off by dj Boone Blanco and host cutewillow Carlberg. Avatars crammed in 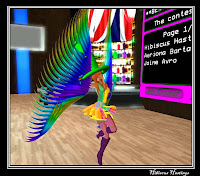 , dancing and chatting, all to dj Boone’s great music. A best in dancewear contest was held, Clive Hissop won the men’s prize and the ladies’ prize was shared by Isabella Elcano and Suzi Gravois. Next up was dj Brie Janick and host Emmah Skytower, who kept things going, with a colourful costume contest and Brie’s dance music, although Brie did move away from dance to play Bon Jovi’s “You Give Love a Bad Name” for Pink Bachem. The male winner of the colourful outfit contest was Clive Hissop, in a subtle interpretation of the th 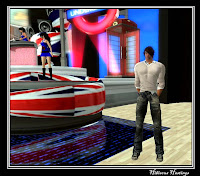 eme with his black on black choice of clothing, whereas the female winner, Jaine Avro, went with a more traditional approach, as a beautiful rainbow coloured butterfly. Congratulations to both. Estelle Parnall of Lost Dreams donated two dresses for prizes and two pairs of boots were provided by Zhao shoes.The new club looks fabulous, thanks to the work of all concerned. It was designed by TD Reinard, who is also responsible for some of the other builds in SL London. He has done an outstanding job on the new UGC. Nils T 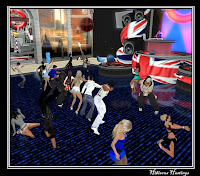 omorrow created the beautiful new uniforms. However, the heart of the club is in the people there and that remains unchanged. The Underground Club is still the best place in SL to meet friends and have a great time.