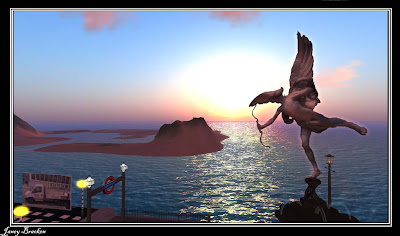 London already has a large presence in the virtual world, SL London consis 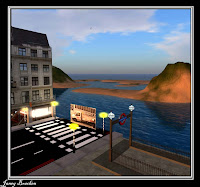 ts of 5 sims (simulated areas), Chelsea, Knightsbridge, Kensington, Mayfair and Hyde Park. The owner of SL London, Debs Regent, showed me a plan some time ago, of her ideas to extend even further. On 8 March 2009 I opened my map of London and there was a brand new sim, right next to the Mayfair Region. The new area is to be Soho, a copy of the cosmopolitan region in the heart of the West End of the real London. The real Soho is famous for its nightlife, and in the past, for it’s seedier side of society. A few years ago Soho was known for its strip clubs, sex shops and ladies of the oldest profession who fre 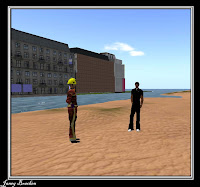 quented the streets selling their wares. All the same, the real Soho has a vitality about it that makes it different to any other parts of London, a small crowded diverse community, all crammed into a square mile.

In the 1980’s the area was subject to many changes, attracting an ‘up market’ cliental with smart new restaurants opening, plus media groups moving in and using it for their business venues. Soho is now a very trendy and fashionable 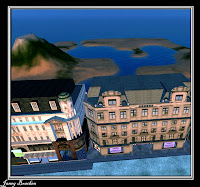 place to live, whilst still preserving its slightly risqué reputation, it is a much sought after area for many Londoners.

I had never seen a brand new sim before and it was presented as a mountainous terrain with sandy, grassy island areas, surrounded by sea. The SL London builders will level all this out before they can even think about building there. SL itself would appear to be suffering from problems because of the large increase of people who have joined, the 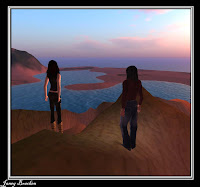 refore any new builds within the virtual world have to be taken on with a lot of thought, reducing as many objects as possible and using simplified textures to help decrease the possibility of lag.

I will be very interested to see what sort of establishments Debs will open in the new sim, will there still be that element of ‘naughty Soho’? Also a brave move from her while the recession bites, even in SL, but this will give more people op 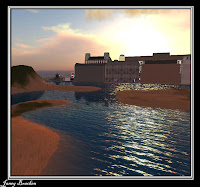 portunities to start businesses virtually as well, maybe even some that will be linked to the real Soho firms using SL as an advertising medium. Whatever happens, I am sure they will mirror the rich tapestry of life in the real Soho. It’s nice to be there and watch it all happen!!!