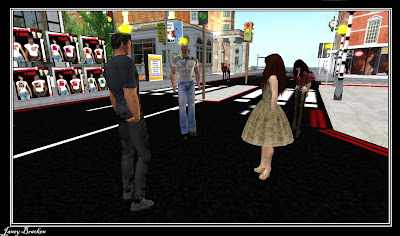 I like to bring you as much news as I can about the progress of the London sims and sometimes there is a little breakdown in communication between me and the powers that be in SL London, so at times I look at things and wonder what is going on, as I may not have had a ‘heads up’ from anyone in charge. I do generally try to find out and not take things at face value, because usually there are reasons for changes. 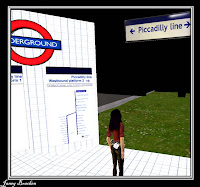 cus Hastings and London Greeter Auti Cobas. We were chatting about the sims in general when Auti called our attention to the Underground Station nearby, and the fact that it looked blocked off. We went and investigated and the SL London Tube Station had actually been levelled off and was gone completely.

Auti contacted the rest of the London Team to ask what was happening and next thing Director Das Wade came over to see us and fill us in on a few things. Das told us that they are working to clear everything from under the London sims at the moment, so there is nothing below street level until the tidy up operation is completed. Das said ‘we have new stations and trains going in’ he continued ‘there’s so many lost prims under there.’ He told us that they had been trying to reduce lag all over the sims (lag is when an avatar cannot move around easily and objects take a long time to form. Even chat is affected, showing the text in the wrong order or not at all).

I asked Das if they were going to reintroduce the SL London Buses (we all miss them!!) and he said ‘yep, buses, taxies and trains’. Hibiscus asked Das where the tube trains would run to. He told us ‘the undergrou 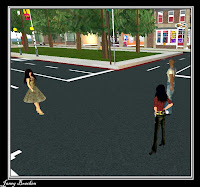 nd will be a loop round Knightsbridge’ and added ‘the other sims stations will have walk-ways through to Knightsbridge.’ This sounds like a brilliant idea as crossing the sims has been pretty dangerous at the moment, I quite often find my avatar carries on going, walking through walls or flying off into the sea before I snap back and finally manage to cross the border. In respect of lag, Das told me that SL in itself has produced a lot of lag problems lately and I agree, it seems as if the increased number of people joining has definitely caused system lag. Something I’m sure the Lindens will be working on. Das said ‘we have some new team members that are (working) flat out looking at lag.’

The roads around SL London, which I have reported on a few times, because of their need for repair, are being dealt with as well. Das told us that the dark surfaces,which had been used, also caused lag and the team have started working on a new lighter grey road surface. Das took us over to Chelsea to see the new style and it looked great, he said all the road markings were also new. This is a far softer look and much more in keeping with the rest of the builds in the sim. Das told us that they are looking at renewing some of the buildings as well, so all in all they are working very hard behind the scenes and I’m sure the already special SL London sims will be the pride of Second Life once the work is completed.
Posted by Janey Bracken at 00:02