Style On a Budget 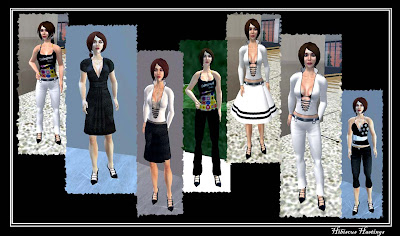 Recently my fellow Virtually London (lite) reporter pixi Piers and I were given an assignment to dress ourselves for L$500 each using merchandise purchased in the London sims.

Since my budget was limited, I started off at the freebie store '3 for All' in Chelsea. There I picked up a set of capri pants (7 pairs), a set of jeans(8 pairs) and a box of hair (220). After this I went to House of Blinker in Knightsbridge where L$5 bought 4 pairs of stiletto shoes. There was also a gift available which included a pair of boots and an outfit. Following this I walked over to Gbberish, where I found a cute tank top, which was free.

Next I went to Mayfair, where many new stores have recently opened. From UK Couture I purchased the Angel Couture outfit for L$299. This included a jacket, with collar, cuffs, and epaulettes, a bra, a hat, a pair of pants and skirt (flexi and skirt layer). I then 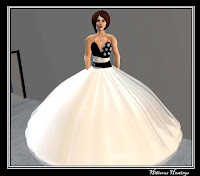 stopped in at Lost Dreams, which also has a store in Knightsbridge, where I bought the Sarah dress in grey for L$180. By joining the group I received a free gold lurex top. Continuing down Regent Street I popped into Cihuaé where I discovered a lovely heart necklace, a special for Valentine’s Day and only L$1.

Reaching Conduit Street I went into Sascha’s Designs where I acquired a ‘dollarbie’ special named “London Calling”, a black and white evening gown. This included a shirt layer bodice, a skirt and a flexi skirt. Returning to Knightsbridge I found a freebie box of clothes on the top floor of the Knightsbridge Department Store. The woman’s clothing box contained a beaded wedding gown, so now I am all prepared if someone pops the question and I don’t want to give them time to rethink it. (It also included a pink ball gown and woman’s tuxedo, with skirt and pants) I have to see if there is a Las Vegas sim for quickie weddings, but that should be another story, and probably not for Virtually London (lite). However, a new dating service is being set up, so perhaps this information could come in handy for those clients. Next to the women’s clothing box is a man’s box containing a tuxedo. Altogether I spent L$486.

My goal was to find as many outfits as possible for a variety of occasions. By breaking up the outfits and mixing and matching this could be successfully done. The Sarah dress could be worn in a business-like environment. The Angel Couture outfit could be worn for business, going to a club or even casuall 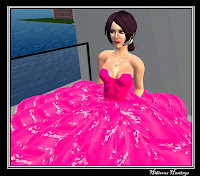 y, depending on the items you chose to wear. The ballgowns could be worn to formal events. It is even possible to create some outfits for free, by using the jeans or capris from the freebie store along with the boots from House of Blinker, and the tops from the wedding gown or pink ball gown, the gold lurex top from Lost Dreams, or tank top from Gbberish. I wore hair I found in the freebie store, too.

The real budget breaker is footwear. The only footwear I found that really fit into my budget was from House of Blinker. While I can understand that shoes are challenging to make, they cover only a small amount of real estate, so to speak, and for the budget conscious avatar this can be a problem.

Jewellery is a luxury item yet adds so much to an outfit. That is why I was so appreciative of Albros Breda’s Valentine’s special, from her Cihuaé shop. The necklace, while not a bold piece, is well made and very attractive, something that can go from casual to dressy. It is also a great introduction to the quality of the pieces she creates.

The constraints upon this challenge meant that I could not shop outside of the London sims. However, normally I do and everyone else does too, so that the L$ 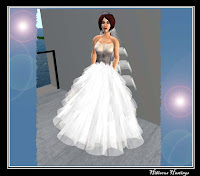 500 budget would have gone a lot farther. Most of the stores inside the London sims have other branches outside of sl London. Some of them had sales on during the time I was shopping, however since the sales were not in the sim, I was not able to take advantage of them. As an example, one sl London store offered a dress at L$220 while the same dress was sold at a special price of L$100 in a branch outside of sl London. Some stores also offered freebies or group gifts not available in the London sims. That is unfortunate as these gifts frequently serve as an introduction to the merchandise available from different shops, and in my case have subsequently led me to purchase clothing, shoes and jewellery at full price, once I became familiar with the products offered.

Also during the period in which I was shopping on a budget a treasure hunt was held. I have not included any of the items from the treasure hunt in this report, but I was pleased to find that the hunt was well supported by sl London merchants, and many high quality items were made available as prizes.

It is possible to dress your avatar on a budget in the London sims if you shop carefully. Businesses have been coming into sl London recently and it is hoped that even more will follow, to offer residents and visitors an even greater variety of choice in style and cost.