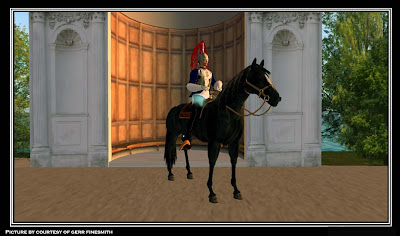 If you have spent any time in SL London at all, you are sure to have seen a handsome avatar in uniform. This is Gerr Finesmith, uniform creator and now shop owner.Gerr 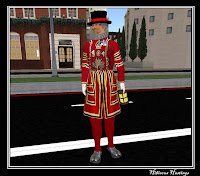 first came to Second Life after having seen reports on television. He had previously been in the moove virtual world but found it too static so he decided to try out Second Life instead. Gerr has been in SL London since September, 2008. He first started out, as many avatars do, searching for places closer to RL home, which in his case is in the vicinity of Brighton. He eventually found SL London and was “was struck by how good this place (SL London) is, how it got the feel of London in real life ... there seemed to be so much going on and like the real London always something new to see. (There are) always people here, at other places you arrive and the place is deserted, here something is always going on.”
And where did the idea for uniforms come from? Gerr said “When I came to London SL I thought what do peopl 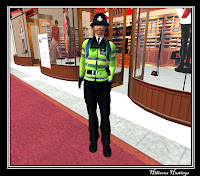 e look for in (RL) London and the 3 things they want to see are Beefeaters, Bobbies and Guardsmen ... they appear on all the London adverts. So I thought I would see if I could make them and have added the horseguards and the royal horse artillery.” He has made the Beefeater (his first uniform), 2 bobbies and 2 horseguards. He has also produced the uniform for the beadle of the Burlington Arcade, very appropriate since his shop, Fine & Smith, is in our own arcade in SL Mayfair. In the future Gerr is thinking of making uniforms for female avatars. He will also do custom uniforms, so if anyone is interested in a uniform that is not currently available, get in touch with him. As well, Gerr would like to get together a troup of guardsmen to patrol the memorials in the sim.

In addition, Gerr works as one of the London Greeters. The uniforms 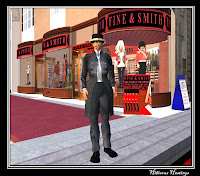 must impress some of the newbies, particularly those who might think about making trouble. As Gerr says “the handcuffs help lol”!

Drop in to Fine & Smith to have a look at Gerr’s uniforms. The shop itself is beautifully appointed, no doubt reflecting the concern for detail that Gerr brings to his real life career as an architect. And you can pick up a freebie so you can discover the quality of work for yourself.